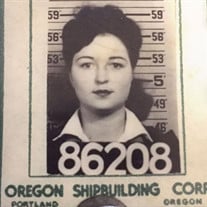 Agnes “Aggie” Scholastica Terhaar, 94, died April 29, 2017.She was born February 10, 1923, in Cottonwood, Idaho, to Vincent and Anna Duman. She is preceded in death by parents; son, Bob; sisters and brothers Mary LaChapelle, Alfred Duman, Regina Wilbur, Dominic Duman, Harold Duman, Gregg Duman, John Duman, and Vince Duman; daughter-in-law, Sharon Nofziger Terhaar. She is survived by husband of 69 years, John Terhaar of Corvallis; sons and wives, Ron and Nancy Terhaar of Albany, Gregg and Jan Terhaar of Sisters, Jim Terhaar and Kelly Esterbrook of Bend; sisters, Frances Pieper of Akron, Colorado, Elizabeth “Betty” Kuther of Bend, Catherine “Casey” Brockamp of Corvallis, and Patricia Seubert of Shelby, Montana; and grandson, Kelly Crowther. According to a sister, Aggie was always the “go-to girl” of the family, a leader who could do anything that needed done. Already an excellent seamstress at age 15, she made the dresses for her younger sisters. Years later she made wedding dresses for three of them. Aggie epitomized the pioneering spirit when she left home as a teenager for Portland to find better opportunities. She found work in the Pendleton Woolen Mills for much better wages than were available back home and soon had other family members migrating to Oregon, eventually including her parents who resettled the family in Mt. Angel. As WWII began, she became a “Rosie the Riveter” working in the war effort. In her case, “Aggie the Welder” spent time welding the “Liberty Ships” in the shipyards of Portland’s Oregon Ship Building Corporation. The picture included is of Aggie’s ID badge from the shipyards, found among her keepsakes. When the war ended, she went from ship builder to family builder. She married John and started her family. In the early 1950’s, they bought and operated a laundry near the Oregon State College campus. She loved family and enjoyed many happy holiday get-togethers and family picnics. She was dedicated to St. Mary’s Catholic Church, serving as Parish Council President for two years. She was instrumental in starting the Corvallis court of The Catholic Daughters of America and was its first Regent. She then proceeded to sew all the ceremonial robes and the banner for the organization in order to save money for the new organization. In the 1980’s and 90’s, she took up bowling and became quite good at it. For many years she taught bowling at Highland Bowl to youngsters who wanted to learn. This is just a peek at a few events in 94 well lived years. Services will be at St. Mary’s Catholic Church, 501 NW 25th St. Corvallis on Friday, May 5, with Rosary beginning 10:15 a.m. and the Funeral Mass at 11 a.m.

The family of Agnes "Aggie" Terhaar created this Life Tributes page to make it easy to share your memories.