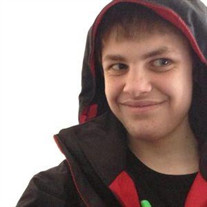 Aja Prema Dasa, 16, passed away unexpectedly in Spartanburg, SC, on February 11, 2015. The second of three sons born to Jenifer Runnion and Steve Hadachek, Aja was a sophomore at Spartanburg High School. He is survived by his parents; sister Sierra (Cecil Mininger) Hadachek; brothers Jeremiah (Christina) Macy, Caitanya Dasa, Amarendra Dasa, and Satya Dasa; nephews Ronan, Dane, and Talin; grandfather Leonard Hadachek; and several aunts, uncles, and cousins. He was preceded in death by brother Zack Landers and grandparents Sarah Coburn and Alex and Lotta Runnion. Aja was born in Corvallis Oregon, where he lived until moving to South Carolina with his mother and two brothers nearly 3 years ago. In Corvallis, Aja attended Lincoln Elementary, Philomath Elementary and Philomath Middle Schools. In middle school, he joined the Lego Robotics team. Aja was a bright and artistic young man. He enjoyed modeling and made incredible creations with many materials, including tinfoil, clay, and especially Lego. He enjoyed painting his models in order to bring his creations, and the imaginative games in which they were used, to life. After moving to Spartanburg, Aja attended Gaffney Junior High School and Spartanburg High School, where he was learning German and continued to pursue his interest in lego robotics. Aja was particularly kind, genuine, and had a delightful sense of humor and playfulness. Aja was dearly loved and will continue to be deeply missed by his family and friends. A graveside service and burial will take place at 1 p.m. Saturday February 21 at Locke Cemetery in Corvallis, followed by a memorial and refreshments at First Presbyterian Church at 9th and Monroe in Corvallis. The family would like to express their gratitude for the support and help received during this difficult time to many, including the Baha'i communities of Corvallis, Oregon, the Baha'i community of Spartanburg South Carolina, the communities of Spartanburg High School and McCracken Middle School in Spartanburg, DeMoss-Durdan Funeral Home in Corvallis, gofundme.com and the people who contributed to the funeral fund, and all who have offered loving thoughts and prayers on our behalf.

Aja Prema Dasa, 16, passed away unexpectedly in Spartanburg, SC, on February 11, 2015. The second of three sons born to Jenifer Runnion and Steve Hadachek, Aja was a sophomore at Spartanburg High School. He is survived by his parents; sister... View Obituary & Service Information

The family of Aja Prema Dasa created this Life Tributes page to make it easy to share your memories.