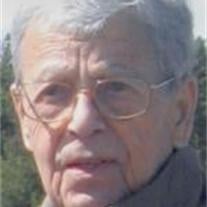 March 26, 1921 — April 22, 2010 Albert Joseph DiGiulio of Corvallis died Thursday, April 22, 2010, at Good Samaritan Regional Medical Center. He was 89. Al was born in Fossacessia, Italy, to Philomena Moscatello DiGiulio and Anthony DiGiulio. When he was 10 years old, he and his mother immigrated to Harrisburg, Pa., rejoining his father, who had immigrated a few years earlier. The family soon moved and settled in Chicago, Ill. During World War II, Al served as an aircraft mechanic in India for the U.S. Army Air Forces. After the war, Al returned to Chicago and pursued a college education, graduating from Chicago Technical College in 1949 with a bachelor of science degree in electrical engineering. He married Mary Highland in 1950. They had two children, James Anthony DiGiulio and Theresa Ann DiGiulio, and settled in Arlington Heights, Ill. Al worked as an electrical engineer for many companies, including Sperry Rand, Hallicrafters, Addressograph Multigraph and finally, Quaker Oats. All of these jobs were in the Chicago area, except for Sperry Rand, which was in New York City where their son, James, was born. Early in his career, Al was involved in designing copying machines, including an early prototype of a plain-paper copier. Following his retirement, Al and Mary lived for several years in Hawthorn Woods, Ill., and then relocated to Corvallis in 1998 to be close to their grandchildren. Both of them were avid bridge players, and found several groups to play with after moving here. Al is survived by his wife of 60 years, Mary DiGiulio of Corvallis; his daughter, Theresa DiGiulio of Chicago; and his son, Jim DiGiulio, daughter-in-law, Kelly Donegan, and grandchildren, Candice DiGiulio and Chloe Donegan, all of Corvallis.

The family of Albert DiGiulio created this Life Tributes page to make it easy to share your memories.