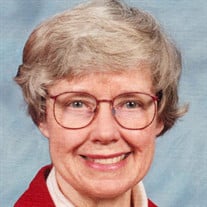 Alice McCombe Block November 29, 1937 – October 28, 2015 After a long illness, Alice McCombe Block passed peacefully with her husband of over 50 years at her side. Alice was born and grew up in Waukesha, WI. Her loving parents were Charlotte and James McCombe. She received her BS degree in Education from Maryville College, a small Presbyterian liberal arts college located near Knoxville, TN. Alice’s first teaching position was in Grand Rapids, MI. She moved to Madison, WI and taught fifth grade in the suburb of Sun Prairie. She enjoyed teaching fifth grade because she found that the students took an active part in their learning. Alice also began working on her Master’s degree at the University of Wisconsin. Her thesis project involved having her fifth grade students tape record interviews with descendants of pioneer families. While at the university, she attended the University Presbyterian Church (Pres House), where she met her future husband, John, who was a graduate student in medicinal chemistry. They married in December 1964. With their new degrees, the couple moved to Corvallis in September 1966. Initially, Alice did substitute teaching, but, with the birth of her first child, she became a stay-at-home mom. Her many activities focused around her children and evolved as they grew older. At the First Presbyterian Church, she taught Sunday school and was on the Board of Deacons. In the latter capacity, she represented the church on the ecumenical Voluntary Interfaith Caregivers. Alice held different positions with Presbyterian Women including Program Chair and Moderator, and she was named a National Honorary Life Member. Alice attended several Presbyterian Women triennial national meetings. Because of son Alan, she was a Cub Scout den mother, den mother coach and day camp director. Because of daughters Bonnie and Charlotte, Alice was a Brownie and Girl Scout leader, day camp director, Council Program Committee Chair and successful grant writer to fund campership scholarships. Another focus of her service was the OSU Folk Club. Alice was Scholarship Chair, Program Co-Chair, Secretary, President, Historian and OSU Folk Club Thrift Shop volunteer including Friday Morning Shift Captain and Board member. Throughout all of these volunteer activities, she focused on development of youth and their appreciation of and interaction with our diverse world communities. This led to Alice’s intensive involvement with American Field Service (AFS), a world-wide high school exchange program established to bring about peace through international understanding at the grass roots level. Alice and John hosted students from Germany and Denmark before Charlotte spent a year in Denmark. Alice served as the annual AFS Fund-Raiser Dessert Chair for several years, Corvallis Chapter President for over 10 years and AFS Pacific-Cascades Area Council Area Hosting Coordinator for several years. She facilitated the placement of eight high school students from Uzhhorod, Ukraine, Corvallis’ Sister City. Alice has received much recognition for her volunteer accomplishments. Perhaps she valued most being one of three finalists in 2003 for Corvallis Senior First Citizen. One of Alice’s greatest enjoyments was travel, beginning shortly after the end of WW II when her parents took her to Northern Ireland and the farm where her father was raised. She made sure that John and the children joined her on some of these trips. She remained in close contact with her family in Northern Ireland and enjoyed sharing her Irish heritage with others. Other travels included Japan, Western Europe, Russia, Panama and Costa Rica. Alice is survived by her husband, John, and children Alan, Bonnie (Frank) Howarth and Charlotte plus two grandchildren Calvin and Claire Howarth. In lieu of flowers, the family asks that donations be made in Alice’s name to Benton County Hospice Service, OSU Folk Club Thrift Shop Scholarship Fund or Presbyterian Women Missions in care of the First Presbyterian Church. A memorial service celebrating Alice’s life will be at 2:00 p.m. on Thursday, November 12, in the sanctuary of the First Presbyterian Church, 114 SW 8th St, Corvallis. Please share your thoughts and memories for the family at www.demossdurdan.com.

Alice McCombe Block November 29, 1937 &#8211; October 28, 2015 After a long illness, Alice McCombe Block passed peacefully with her husband of over 50 years at her side. Alice was born and grew up in Waukesha, WI. Her loving parents were... View Obituary & Service Information

The family of Alice Block created this Life Tributes page to make it easy to share your memories.