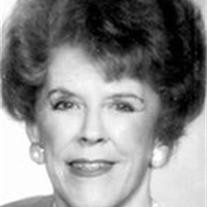 Alma Marie Pastega peacefully passed away on Friday, Feb. 22, with her husband, Mario, four children, a grandchild and a caregiver at her bedside, holding hands and praying for her. Alma was born in Sisson, Calif., now known as Mt. Shasta, to Emilia Uccello and Louis Solari. Alma was the 11th of 12 children born to this marriage. Alma attended the Mt. Shasta elementary and high schools, where she graduated in 1935. Alma’s three favorite subjects in school were music, art and physical education. She was the editor of the artistic section of the school yearbook. Her talents in art were one of her finest attributes. She also participated in all of the sports programs, including track and snow skiing. She jumped center on the basketball team. After graduation, she attended the San Francisco School of Fashion and Art, where she excelled in both fashion and art. She graduated with honors and was offered an opportunity with a fashion design company in San Francisco, but she yearned to go back to Mt. Shasta, where she worked at her father’s bakery and grocery store. In May 1937, she met Mario and they started dating, but before they could go on a date, Alma and Mario had to run hundreds of loaves of bread through the slicing machine. They married on April 24, 1938. Mario was employed on the staff of the district attorney’s office in Yreka, Calif., at $90 per month. They purchased their first home for $1,200, with nothing down, no interest with payments of $15 a month. Alma and Mario’s first child, Gary, was born on St. Patrick’s Day, 1942. Their next child, Emily Jo, was born in 1944. The most traumatic experience in Alma and Mario’s life was the loss of Emilie Jo in an accident in 1968 at age 23. The beautiful family continued living in Yreka until Mario entered the service during World War II. Alma and family moved back to Mt. Shasta and then to San Diego to be with Mario, who was in the Navy. After Mario’s discharge from the Navy, they moved back to Yreka, where Mario returned to his position as an assistant county clerk. 1946 was an exciting year as twin sons Denny and Kenneth were born. In 1948, Mario had the opportunity to purchase a half interest in the Pepsi plant in Klamath Falls with his brother-in-law, Elmer Kennedy. In 1951, Leo Bocchi purchased the interest of Elmer Kennedy. Thereafter, Mario and Leo were co-owners for 36 years. The Pastega family lived in Klamath Falls until 1961, when Alma and Mario purchased the Pepsi plant in Corvallis. The most important highlight of 1961 was when their daughter Lisa was born. Alma has always had an outgoing personality. She loved all music and played the piano, organ and accordion daily. “Nonna” taught each of her 15 grandchildren how to play “Chopsticks” on the piano. Alma loved her cats and the many animals that visited her beautiful garden. She was a member of the Lady Elks and Lady Moose clubs, and on special occasions she, Emilie Jo and Gary would be the entertainment at these lodges. For 47 years, Alma had her hair done at the Phagan’s Beauty School, where she was a friend to all the students. Many of them asked her to attend their graduations, which she did with a gift for each. Alma was a fantastic Italian cook. Her delicious minestrone, pesto and risotto were known far and wide. Alma was a volunteer firefighter. She drove a fire truck with a 500-gallon water tank until her 65th birthday. Her artistic talent started in high school and college where she won an art contest sponsored by the San Francisco Examiner. In Corvallis, she is best known for her artistic talent when she started sketching, drawing and painting the many characters that are in the Christmas display at the Pepsi plant. Alma will be remembered for many years for delighting thousands during Christmas with the Pastega family Christmas display. She was always a happy lady and had a smile for all. Alma was very proud that the Corvallis Rotary Club dedicated a bench in her honor, and she was also very proud of the Alma Pastega Healing Garden with a waterfall at the Mario Pastega House at Good Samaritan Hospital. Alma may be gone, but there are so many pleasant memories of the many lives she touched with her happiness. Alma was given much care and love by her sister-in-law, Bianca Pastega. The family is very appreciative of the loving care given to Alma by each of her in-home care givers this past year. They not only cared for Alma, they loved her like family. Alma is survived by her husband, Mario, of 69 years and 10 months; her sons, Gary, Kenneth and Denny; and her daughter Lisa. 15 grandchildren and 10 great-grandchildren called her Nonna and she had a special relationship with each one. Services will be at St. Mary’s Catholic Church in Corvallis. Vigil/wake will be 7 p.m. Friday, Feb. 29. Funeral mass will be 11 a.m. Saturday, March 1. In memory of Alma, donations can be made to the Mario Pastega House Endowment Fund in care of Good Samaritan Hospital Foundation, 3600 N.W. Samaritan Drive, Corvallis, OR 97330 or at www. samhealth.org.

Alma Marie Pastega peacefully passed away on Friday, Feb. 22, with her husband, Mario, four children, a grandchild and a caregiver at her bedside, holding hands and praying for her. Alma was born in Sisson, Calif., now known as Mt. Shasta,... View Obituary & Service Information

The family of Alma Pastega created this Life Tributes page to make it easy to share your memories.