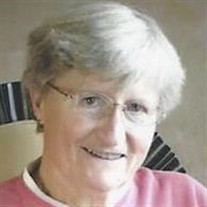 Alta Elaine Mitchoff was born on May 16, 1932, in Portland, Oregon, to Donald and Susan (Unger) McPherson. She attended grade school at Peninsula Elementary and graduated from Roosevelt High School in 1950. Alta passed away peacefully on November 30, 2018, in Corvallis, with her two daughters by her side. After high school, Alta traveled to Japan to work for the Army as a civilian secretary. Upon returning in 1955, she met her husband George Mitchoff and they married on September 27, 1958. Alta and George began their family life in the Kenton District of North Portland, where they lived on Terry Street. For many years, Alta worked as bookkeeper for Sam’s Texaco and Towing. Later, she applied her skills at Pendleton Woolen Mills. Alta and George moved to Corvallis in 2006 to be closer to family. Alta was devoted to her community as an activist, gardener and volunteer. Her community-giving included being a longstanding PTA member of Kenton Elementary, Sunday school teacher at Queen of Peace Catholic Church, as a longtime member of the Kenton Neighborhood Association, working on neighborhood cleanups and beautification projects, Historic Kenton Firehouse Committee member, Master Gardener of Multnomah and Benton counties, historical author, Peninsula Garden Club member, and a decade-long volunteer with the Portland Marathon. Alta will be remembered by most for her love of gardening that also benefited the greater community. In 1994, Alta received a Spirit of Portland Award as Volunteer of the Year for her work establishing and maintaining the Kenton Neighborhood Rose Garden on Interstate Avenue. “Alta was an exemplary volunteer — deeply and seemingly tireless in her commitment to Kenton.” Growing up and living in North Portland, Alta wrote a book titled "The History of the Kenton Neighborhood" to help designate Kenton as a historic district. Between paid work, volunteering and raising three children, Alta made time to learn to oil paint and become a skilled artist over the years. Many of her beautiful paintings hang on the walls of family, friends and businesses. When asked why she took on painting she replied, “It helps keep me sane.” Alta is survived by her husband of 60 years, George; son, Michael Mitchoff of Seattle; daughters, Mary Van Orden of Eugene and Maureen Puettmann (Klaus) of Corvallis; sister, Millie Reakseker (St. Helens); and brother, John (Barbara) Matheson of Winlock. She was blessed with three grandchildren, Paul Puettmann (Bozeman), Peter Puettmann (Monmouth), and Celia Mitchoff-Lugo (Seattle). In lieu of flowers, please consider a donation to your favorite animal shelter or the Alzheimer’s Association www.alz.org. Please leave a note to family with your memories of Alta at https://www.forevermissed.com/alta-elaine-mitchoff. A family memorial gathering will take place this summer in Rockaway, Oregon.

Alta Elaine Mitchoff was born on May 16, 1932, in Portland, Oregon, to Donald and Susan (Unger) McPherson. She attended grade school at Peninsula Elementary and graduated from Roosevelt High School in 1950. Alta passed away peacefully on November... View Obituary & Service Information

The family of Alta Elaine Mitchoff created this Life Tributes page to make it easy to share your memories.