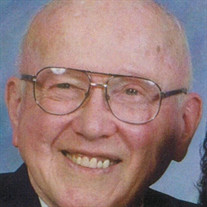 Andrew Adrian Duncan 1921- 2014 Andrew was born on March 13, 1921 in Pencaitland, Scotland just outside Edinburgh. He died in the grace of God at his home in Corvallis, Oregon on June 6, 2014. He was six years old when his parents, Andrew and Helen Duncan, and sister, Helen, immigrated to Baltimore, Maryland. He grew up during the depression excelling in school and sports, and brightening spirits with his mischievous ways. His tremendous vitality and love of life were expressed in his hallmark smile and infectious humor that could light up a room and immediately make everyone feel special. After high school, he joined the U.S. Army, was dispatched to England and Germany during World War II, and found his niche in the Veterinary Corps. During this time he met his first wife, Hazel, who was in the Royal Corps, then moved back to Maryland. With the help of the G.I. bill he was able to get a degree and completed his Ph.D. in Horticulture in 1956 at the University of Maryland. With four children, the family moved to Corvallis in 1958. He was then assigned as an extension specialist at Oregon State University and contributed his expertise to improve the production of food crops, particularly vegetables, worldwide. As we reflect on his 93 years, the scope of his myriad accomplishments make him hard to portray without people saying, “Did that really happen?” Machinery company engineers credit him with leadership that led to the development of the multi-row bean and pea harvesters. He also introduced Dutch methods of producing pearl onions to the U.S. and helped develop a mechanical harvester for brussels sprouts. He personally petitioned Oregon farmers to grow sprouts in the volume required for production and distribution by Green Giant. His achievements led him to head the Horticulture Department at the University of Minnesota in 1970. He was further commissioned Director of the Tropical Research and Education Center at Homestead, University of Florida in 1976. He retired in 1986 and returned to Corvallis and was a Horticulture Professor Emeritus at OSU. He helped put up the OSU Faculty and Staff Fitness program in 1987. For several years since, he was a member of the FSF Council and a regular participant to the program until his health started to decline. During his career, and even while retired, he was a regular consultant for USDA and USAID devising agricultural programs in Morocco, India, Haiti, Bangladesh, Yemen, Saudi Arabia, Philippines and China. While in Florida, he and his team refined lime production methods, which made the fruit available for retail sale nationwide for the first time. He met and married Virginia, his third wife, almost twenty years ago in a whirlwind fashion. Together they continued to travel to Scotland, Switzerland, England Germany, France, Canada, Japan and the Philippines to meet new families and friends. They complemented each other with their love of nature, gardening and cooking. Virginia was his wife, best friend, spiritual companion, and devoted, loving caregiver. Andrew is survived by Virginia, his children - Rod, Bonnie, and Laura; eight grandchildren and eleven great grandchildren. He is preceded in death by his parents; sister; first wife, Hazel and their son, Ian; and second wife, Diana. We are so blessed to have him in our lives. We will hold his deep and abiding love in our hearts forever, and share the inheritance of his wonderful smile and sense of humor. He played bagpipes for special occasions, retaining his Scottish heritage, a powerful legacy for all his descendants. Thanks to all our friends and volunteers who gave their utmost support throughout these last 10 years of Andrew’s health journey. With special thanks to those from St. Mary’s community, the staff of Benton Hospice, and the medical practitioners especially Dr. Michael Sherman. Lastly, we thank all of you who have shown your love, comfort and compassion during this time of sorrow.

Andrew Adrian Duncan 1921- 2014 Andrew was born on March 13, 1921 in Pencaitland, Scotland just outside Edinburgh. He died in the grace of God at his home in Corvallis, Oregon on June 6, 2014. He was six years old when his parents, Andrew and... View Obituary & Service Information

The family of Andrew Adrian Duncan created this Life Tributes page to make it easy to share your memories.