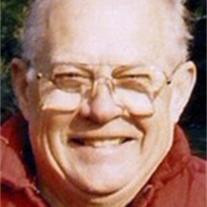 Andy resided in Corvallis and passed away at Regent Court Memory Center at the age of 75. He was the son of Andrew H. and Rose Forner VanderPlaat, born in St. Cloud, Minn. He lived in St. Cloud until he was 8 years old. The family moved to Portland in 1941. Andy graduated from Central Catholic High School. Andy served from 1953 to 1955 in the U.S. Coast Guard. In 1953, he married Beverly Murry in Portland. After the Coast Guard, he attended the University of Portland on the GI Bill, and graduated in 1959 with a bachelor of science degree in business administration. He was hired by Crown Zellerbach Corporation as a purchasing agent. Later he moved on to become business manager at various private companies near Portland. In 1963, he became the first business manager at Marylhurst College in Lake Oswego, and moved the family to Oregon City. He went on to become the business manager at the University of Portland, and there earned his master's degree in business administration. In 1973, he was hired as the business manager at Oregon State University in the School of Agriculture. During that time, he served as the president of the State Management Association. He worked at OSU until 1984, when the family moved to Olympia, Wash., where Andy was the assistant treasurer at St. Martin's College. Andy and Bev returned to Corvallis in 1986. Andy began his teaching career as a business instructor at Linn-Benton Community College. His greatest joy was teaching and assisting displaced timber industry workers in retraining. Andy's greatest love was his family. He enjoyed traveling, hunting, fishing and being a snowbird in Palm Springs, Calif. He is survived by his spouse of 55 years, Beverly. He is also survived by sons Andy and wife, Karen, of Pendleton, Tom and wife, Sue, of Forest Grove, and Paul and wife, Patty, of Springfield; his daughter, Deann Thompson, and husband, Grant, of Corvallis; his niece, Vicki Anderson, and husband, Tom, of Madras; and his brother, Jim, and wife, Chris, of Cottage Grove. Andy has 10 grandchildren, two great-grandchildren and numerous nieces and nephews. He was preceded in death by his younger brother, Thomas. The funeral Mass will take place at noon on Friday, Nov. 13, 2009, at St. Mary's Catholic Church, 501 N.W. 25th St., Corvallis. DeMoss-Durdan Funeral Home is in charge of funeral arrangements. Burial will be a private service at Oaklawn Cemetery in the veterans' section. Donations can be sent to DeMoss-Durdan for the benefit of Benton Hospice Service or Mario Pastega House.

Andy resided in Corvallis and passed away at Regent Court Memory Center at the age of 75. He was the son of Andrew H. and Rose Forner VanderPlaat, born in St. Cloud, Minn. He lived in St. Cloud until he was 8 years old. The family moved... View Obituary & Service Information

The family of Andrew VanderPlaat created this Life Tributes page to make it easy to share your memories.

Andy resided in Corvallis and passed away at Regent Court Memory...