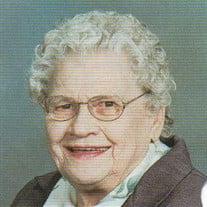 Anna Lucille Dobrinin December 12, 1924 August 6, 2015 Loved ones celebrate the home-going of Anna Lucille Dobrinin on August 6, 2015 at the age of 90. Lucille was born on December 9, 1924 to William and Alma Tuck in Kansas City, MO. She had two brothers and one sister. In 1953, Lucille moved from Kansas City to Corvallis to be near her sister and brother-in-law, Jenny and Gayle McQuery. She met her husband, John Dobrinin, soon thereafter and they married on September 12, 1955. They lived in Peoria and had one son, Bill. Lucille and Bill moved to Corvallis in 1994. Lucille held a variety of jobs during her lifetime, including her work during wartime as a "Rosie the Riveter" welder for Pratt & Whitney -- a government contractor that built missiles. She also worked in the Catalog Fulfillment Center for Sears & Roebuck. She worked for Wagner's Cafe, a downtown Corvallis establishment, in the 1950s. Lucille was a fast-food aficionado of sorts. She was partial to Taco Time's crisp meat burrito and Arby's roast beef sandwiches. She loved meeting new people and visiting with friends. She enjoyed animals, especially dogs, and it always put a huge smile on her face to interact with her friends' dogs. She wasn't a huge football fan, but she did like to watch the OSU Beavers play when their games were televised. She liked to keep up on the news and had a fairly steady viewing diet of MSNBC. But mostly, Lucille loved attending church and Sunday School, and being with her church family. She had a great sense of humor and a bigger-than-life smile that lit up her face. Her bear hugs could squeeze the air right out of you! Lucille was preceded in death by her parents, her husband, one brother and her sister. She is survived by her son, Bill Dobrinin, of Corvallis, and brother, Frank Tuck, of Shawnee, Kansas. Please join us to honor Lucille at 2 pm Saturday, August 15, with viewing from 1:30 until time of service in room D7 at Northwest Hills Community Church, 3300 NW Walnut, Corvallis. A visitation is from 4:00-6:00 pm, Friday, august 14, at DeMoss-Durdan Funeral Home, 815 NW Buchanan avenue, Corvallis. The service will be officiated by Kevin Ferguson, who taught the Senior Fellowship (Sunday School) Class Lucille attended for many years.

The family of Anna Lucille Dobrinin created this Life Tributes page to make it easy to share your memories.