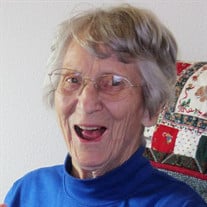 Anna Mae (Ann) Gibbs died Tuesday at Mennonite Village, where she had lived for 24 years. A celebration of her life is planned for 1 p.m. Sunday, June 26, in the Mennonite Home chapel, 5353 Columbus St. SE, Albany. Ann was the first child of Lola Thompson Goebel and J. Julius Goebel. She was born in Independence, Mo., in the old farm home that her paternal grandparents had purchased in 1888. In 1939 she graduated from William Chrisman High School, where she was a prize essayist and a member of the National Honor Society. After attending Business College in Chillicothe, Mo., she worked for government wartime agencies in Kansas City, Mo., and St. Louis, Mo. She met Charles DeWitt Gibbs, a sergeant in the army, on a blind date. They married on Sept. 27, 1944 at the St. Louis Cathedral. She continued government-agency work until 1946, when the couple moved to Stamford, Conn., for Charles’ first post-war position. Subsequent moves took the family to New Jersey in 1952, central Florida in 1960, and back to New Jersey in 1964. Ann did secretarial and editorial work there for a trade magazine. Charles formed a company to manufacture and market his patented device for the wire and cable industry, and Ann became its vice president. Decades later she took pride in telling others that she had been “the vice president of a small corporation.” In 1976 the couple moved their business, Gibbs & Stone Inc., to Hendersonville, N.C. They retired there in 1982. They moved to Mennonite Village in Albany, Ore., in January 1992. Charles died on Nov. 25, 2003. Ann served five years as a Girl Scout leader in New Jersey. She volunteered at the hospital in Eustis, Fla. In North Carolina, she was a state board member of Questers, a national organization for study of antiques and historic sites. In Albany, she was active in the Mennonite Home Auxiliary and in Friends of the Library. She enjoyed bridge and reading, subscribing to two daily papers until the day she died. As Ann’s needs increased, she moved to other parts of Mennonite Village, including Quail Run Assisted Living. Her final home there was Mary’s Place Adult Foster Care, where loving staff made it possible for her to die in her own room. Ann is survived by her daughters and sons-in-law, Barbara Curtin Miles and Denny Miles, and Deborah Gibbs and Tom Smith; granddaughters Marjorie Curtin Murphy (Michael Murphy), Abby Curtin Dacey (Tim Dacey) and Madeline Smith-Gibbs; great-grandchildren Caroline and Elena Murphy and Emmett and Declan Dacey; her brother-in-law, Enoch Davis; and many nieces and nephews. Ann’s younger sister, Mary Alice Goebel Davis, died last year. Family and friends are invited to a Memorial Service , 1:00 pm, Sunday, June 26, 2016 at the Mennonite Village Chapel, 5353 Columbus Street SE, Albany. Memorial gifts may be sent to the Mennonite Village Foundation or Samaritan Evergreen Hospice. Please share your thoughts and memories at www.demossdurdan.com.

Anna Mae (Ann) Gibbs died Tuesday at Mennonite Village, where she had lived for 24 years. A celebration of her life is planned for 1 p.m. Sunday, June 26, in the Mennonite Home chapel, 5353 Columbus St. SE, Albany. Ann was the first child of... View Obituary & Service Information

The family of Anna Mae Gibbs created this Life Tributes page to make it easy to share your memories.