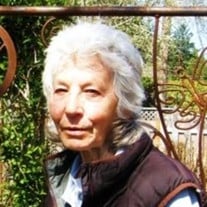 November 9, 1927 — December 21, 2019 In the early morning of December 21, God called Anna Upenieks home. At 92, Anna was ready to greet our Lord. The winter solstice is a special day for Latvians. It was God’s plan for this woman who always held her homeland of Latvia close to the heart. Anna was born on November 9, 1927 to Janis and Virginia Garancs, the second youngest of eight children, in the isolated village of Garanci, near Varaklani, in eastern Latvia, near the Russian border. Far from the capital of Riga, they lived a simple peasant life where farm and family mattered the most. There were many hardships, but there were also many joys. Anna spent long hours working on the farm many months of the year. Even as poor as they were, education for the children was a goal, so they become the first generation in the family to achieve schooling. In the winter, all the children went to school. First to a local one room school and for higher grades to a boarding school nearby. The life of Anna and her family changed abruptly in the summer of 1944. At the age of 16, Anna with her sisters, fled the advancing Russian communists. They boarded a German ship to Riga that first took them to Germany, and eventually to a displaced person camp near Salzburg, Austria. At the camp, Anna met her future husband Arvids Upenieks also a Latvian, from Aluksne. They lived there for many years awaiting resettlement in the United States. It was a relatively happy time. There were no worries of war, there was food to eat, everyone had a job and they were with other Latvians. Anna and Arvids came to Philadelphia in the early 1950’s where they knew other Latvians who had settled there. Anna and Arvids had two daughters, Anita born in 1957, and Maria in 1962. Soon after coming to the U.S., Anna studied cosmetology and received a beautician’s license. For several years, she worked in various Philadelphia salons. Always striving for independence, Anna ventured out on her own and opened a salon in her home. She was a proud businesswoman and continued her salon till she was in the late 70’s. At that time, she moved to Corvallis to be closer to her daughter Anita. In Corvallis, she was an active member of Grace Lutheran church, where she especially liked thought invoking Bible studies. Her other interests included gardening, reading, classical music and exercising. She was often seen in the neighborhood walking with her backpack. Even in times of hardship, Anna always maintained a positive attitude. She was always present in the moment with people she met and made friends in all the places she lived. In her last years, Anna lived at Corvallis Caring Place and Conifer House. Anita wishes to thank all the caregivers at Conifer House and Lumina Hospice for their kindness in caring for Anna. Anna is survived by her daughter Anita Upenieks and husband Joe Beatty of Corvallis; her sister Constance of New York City; and grandchildren Sean, Matthew Andrea and Jesse of Medford. Anna was preceded in death by her husband Arvids and daughter Maria. Following Anna’s wishes there will be no services. Memorial donations can be made to Grace Lutheran Church or Lumina Hospice. DeMoss Durdan Funeral Home is handling arrangements. (www.demosdurdan.com).

The family of Anna Upenieks created this Life Tributes page to make it easy to share your memories.