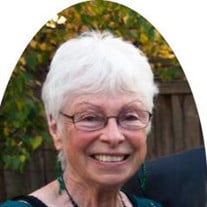 July 3, 1938 – March 13, 2015 Anne Warren Smith, 76, loving partner of Jerry Pollari, slipped away on March 13 at her home in Corvallis. Anne was preceded in death by her parents, Thurman and Laura Warren of New York. She is survived by her life partner, Jerry; two daughters, Amy Beltaine and Rebecca Smith of Portland; and one grandchild, Sierra Pele Dymond-Smith of Salem. She also is survived by her brother, Jack Warren of Minnesota. Anne grew up in upstate New York and graduated from Cornell University in 1960. At Cornell, she fell in love with and married Frederick J. Smith, father of Amy and Rebecca. After moving to Corvallis in 1965, they joined the folk music community and made many lasting friends. Aside from being a loving mother and wife, Anne also found time to fulfill her lifelong dream of being a writer. Over the years, Anne’s interests and roles continually evolved: writing teacher, singer and washtub bass player in The Virgin Frets, Camp Fire troop leader, stepmother to Amity Wrolstad (Jerry’s daughter), knitter and beader of beautiful objects, guitar and harp player, and published author. She worked many years as the events coordinator of the Oregon State University Music Department and the Best Cellar Coffeehouse, a folk music hub. She was diagnosed with ovarian cancer in 2010, but, with treatment and perseverance, overcame the disease. In 2012 Anne’s ovarian cancer returned for the last time, after 15 months of remission. She continued to enjoy her life fully, loving deeply and well until the end. Her creativity, humor, grace, deep appreciation for each and every human being, and enthusiasm for life will be greatly missed by her family, friends, writing students and fans. A celebration of life will take place at 4 p.m. Saturday, March 28, at the Unitarian Universalist Fellowship of Corvallis, 2945 N.W. Circle Blvd., Corvallis, OR 97330. In lieu of flowers, the family requests that donations be made to Vina Moses Center (http://www.vinamoses.org/gifts.htm), which serves families in need in the Benton County area, and where Anne volunteered for more than 40 years.

July 3, 1938 &#8211; March 13, 2015 Anne Warren Smith, 76, loving partner of Jerry Pollari, slipped away on March 13 at her home in Corvallis. Anne was preceded in death by her parents, Thurman and Laura Warren of New York. She is survived... View Obituary & Service Information

The family of Anne Warren Smith created this Life Tributes page to make it easy to share your memories.