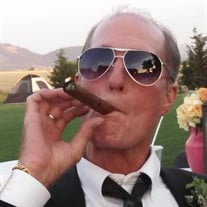 Anthony Ray Stutzman, (Tony), age 58, died Monday, April 22 2019, at the Evergreen Hospice house in Albany. He is survived by his fiancé Theresa Nelson and his faithful dog, Char; his daughter, Danielle (Stutzman) and her husband Ryan Mastropietro and their two sons, Keller and Jaxon; his “boy” Michael Bagley and his daughter Emily and son Michael Jr.; his “girl” Kristina (Bagley) and her husband Jordan Copeland; his sister Jan (Stutzman) and her husband Glynn Mills; and his brother Mike Stutzman. Tony was born to Alice (Ernst) and Emery Stutzman on August 4th, 1960 in Colorado Springs, CO. He was the fourth of 5 children; Russ, Jan and Greg his older siblings and Mike Stutzman, his younger brother and best friend. A few years later, the family moved to Albany Oregon, where Tony lived and worked most of his life. He graduated from South Albany High School 1979. He worked with his father and brothers for years installing siding and gutter, eventually finding himself in disaster restoration and home remodeling. Tony was a “jack of all trades”. If he couldn’t fix it or build it, he knew somebody who could...and they usually owed him a favor, because Tony was the kind of guy that would always show up if you called him. If your water heater blew up, or your car broke down, or you needed to borrow a tool, or build a patio, or put in a window, or remodel your bathroom, or needed a place to stay, or a meal...or just a cheesy joke, a warm smile and his signature line, “it’s gonna be a great day”. And he could have just met you or have known you for years. It wouldn’t have mattered. Tony loved Gummy Bears, Golf, chocolate milk and the Denver Broncos. He hated spiders, the band “Queen”, Pepsi, and tomatoes and often said that they were, “only good for throwing at the wall”. He was a devoted and patient father and wonderful grandfather. He was amazing with children and babies and always had a pocket full of candy for them. He was loyal. Family was everything and if you were a friend, you were a friend for life. Tony was a hard worker, and he had a knack and love for teaching others the trade. He would always say, “now if you don’t have time to do it right the first time, when are you going to have time to come back and fix it”. He was kind, generous and his sense of humor put those around him at ease. He could always brighten the day or pull you out of a bad mood. “Ah, ah, ah,” he’d say. “Now don’t be that way.” He always looked for the good in everything and everyone. He was always optimistic. And he was tough as nails. Tony found out he had cancer in early May of last year, though his fight had began much earlier. In June, he attempted a chemo therapy treatment, but it did not go well and doctors gave him 72hours to live. Miraculously, he “graduated” Hospice, and begun golfing every chance he got, fulfilling his dream of teaching his grandson Keller how to golf and taking him for his first time. He even went back to work. He refused to, “lay down and die”. He lived each day to the fullest, right up until the end. He was one of the good ones. If you knew him, you loved him and he loved you. He was love. Tony passed peacefully on a beautiful Monday afternoon surrounded by loved ones. One of his nurses even commented that, “in all her years, she had never seen a person have such a large and constant group of people coming to be with them in their final days.” He was such an amazing person and presence in so many lives. He will be greatly missed. Family and friends are invited to his Celebration of Life, 10:00 am, Thursday, May 9, 2019 at Hope Church, 2817 Santiam Hwy SE, Albany. Please share your thoughts and memories for the family at www.demossdurdan.com.

The family of Anthony Ray Stutzman created this Life Tributes page to make it easy to share your memories.