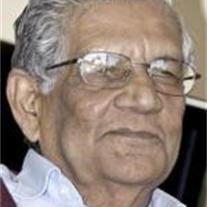 Arif Ali Khan Ghauri, 72, of Corvallis died Saturday, Dec. 4, 2010, of complications after heart surgery in Corvallis. Arif Ali Khan Ghauri was born Sept. 22, 1938, in Pilibhit, India, to Hamid Ali Khan Ghauri and Habib Fatima. He was the youngest of four siblings. The family migrated to Pakistan when the latter was founded in 1947, and chose the town of Sukkur, Sind, as its home. Arif went to school in Sukkur and Hyderabad. He got his Bachelor and Master of Science degrees from the University of Karachi in 1961 and 1962. He joined the University of Peshawar in 1962 as a lecturer in geology, and from 1965 to 1967 pursued higher studies in the University of Aberdeen, Scotland, where he got another master degree. Arif taught structural geology at the University of Peshawar till 1998. It is said that he was a passionate teacher. He worked on the geology of Salt Range, Khewra, one of the largest salt deposits in the world, and that of Pakistan’s northern areas, along the mighty Karakoram Highway linking China and Pakistan. While on these trips, he made lasting friendships. He was chairman of the geology department and the director of the Center of Excellence in Geology at the University of Peshawar, and in the 1980s, an initiator of summer school at Peshawar University’s Baragali Summer Camp, where geologists from all over Pakistan met, held conferences, and compared notes during the warmer months of Pakistani summer. He founded the Peshawar University Science Fair to promote scientific inventions and was president of the fair for several years. He joined GTZ, a nongovernmental organization promoting primary education in Pakistan in 1993, and started writing Urdu textbooks for the Northwest Frontier Province Board of Education. There he found renewed energy and worked with great enthusiasm to help improve textbook content for the young generation of northwestern Pakistan. He wanted children to learn more about science and wrote many textbooks that are today taught in the primary and secondary schools of this region of Pakistan. He was awarded numerous prizes for his books by the National Book Foundation of the country. Arif loved Urdu poetry but did not write any of his own until the mid-1990s. Since then, he has written numerous poetry books for children and youth, revolving largely around scientific subjects. Anything that rhymes is easy to retain and recall, he used to say, and thus an effective learning method. Arif and his wife, Orooj, moved to Corvallis in the year 2009 to enjoy a retired life of peace and quiet, and to be close to their three children and best friends. Here they met a number of wonderful people with whom they made friends. Arif continued writing textbooks and poetry for Gaba Publishers in Karachi, where he worked for over a decade. His writing matured into that of a sensitive poet inspired by his environment and the people around him. He expressed love and emotion in those flowing stanzas he wrote on his Dell machine. Arif felt a sense of accomplishment and happiness living this life. He was with the people he loved and enjoyed. He left no business unfinished. As he looked back, he said he had had a good life. Arif had heart surgery on Oct. 29 at Good Samaritan Regional Medical Center, followed by unexpected complications from which he never recovered. He died at 3:36 p.m. on Dec. 4, and was buried on Dec. 6 in Plot 197 of the Islamic Cemetery of Oregon, Corvallis. Survivors include his wife, Orooj Ghauri; son, Irfan Ghauri; daughters, Shabnam Abdali and Mona Hassan; brother, Asif Ali Khan Ghauri; sisters, Ismat Ara Begum and Sajida Nisar; and six grandchildren.

The family of Arif Khan Ghauri created this Life Tributes page to make it easy to share your memories.