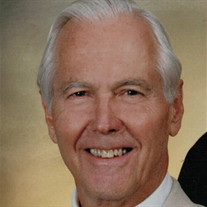 Arnold G. Berlage November 8, 1929- May13, 2018 A Funeral Mass will be held for Arnold Gerhard Berlage, of Corvallis at 2:00 pm, Friday, May 18, 2018 at St. Mary’s Catholic Church, 501 NW 25th Street, Corvallis. Family and friends are also invited to a viewing and Rosary a half-hour before Mass. Father Ignacio Llorente will preside. Interment at Willamette National Cemetery. Arnold was born November 8, 1929 in Riverside, CA to Arnold and Maria (Nee) Berlage, immigrant parents for Germany. He grew up as a happy young boy with his sister, Marie. He attended school in Arlington, CA. He died on Sunday, May 13, 2018. Arnold attended Liberty Grade School & Chemawa Jr. High in Arlington CA. In 1936, the family took a vacation trip to Oregon and bought a dairy farm on Kentuck Inlet in North Bend. They returned to California, where his Dad’s job was, but Herman, Arnold’s uncle, stayed to work the dairy farm in North Bend. Every spring, Arnold and his mom would come to North Bend by train to help Herman on the dairy farm. In 1944, as his father’s job ended, the family moved to their dairy ranch in North Bend, OR, where he attended North Bend High. By 1947, Arnold, his dad, and Uncle had revamped the farm into a very nice place. They raised dairy cows. Arnold graduated that year but stayed on the farm at his father’s request to help him build a barn. It was the first gothic style barn in the Bay Area. He married Marian Koski in 1952 and enter the US Army in May 1953. Sons, Steven (11/15/53) and James (11/15/1954) were born at the Presidio of San Francisco Army Hospital. After being discharged, he attended Oregon State University and graduated with a BS Degree in Engineering in 1959. He joined the J.I. Case Co. in Rockford, IL and Racine WI. After obtaining his MS Degree in engineering from Michigan State University in 1961, he joined the USDA Agricultural Research Service and began his research career at the Harvest Mechanization Project located at the University of CA, Davis, where third son, Brian was born on July 16, of 1963. Arnold transferred to the Tree-Fruit Harvesting Research Project at Wenatchee. While stationed therm he initiated various harvesting and research projects. In 1977, he received the Engineer of the Year award from the local Wenatchee chapter of the National Society of Professional Engineers. During his active research years, he authored and co-authored over 50 articles and peer reviewed publications. Arnold married Rolande Marlin Banks in Dec. 1977, and had their marriage vows renewed at St. Mary’s Catholic Church in Corvallis, OR in 1987, after having received an annulment of the earlier marriage. From Wenatchee, WA, they moved to Corvallis, OR until Arnold retired from USDA-ARS at the end of 1989 as a Project Leader in Seed Conditioning research at Corvallis, OR. He & colleagues were granted two US patents for research while at that project. They then moved to Richmond, OR, to soak up some sunshine, but found the warm season too short. With friends enticing them to move to Arizona, off they went. About this time, their friends were beginning to call them Nomads, but once again they moved. This time to beautiful Richmond, WA where they had planned to stay, but Corvallis was their best choice with family all around them. We’ll miss our old friends, but we will also reconnect with even older friends. Arnold and Rolande who co-joined their respective families, have 8 children, 14 grandchildren and 5 great grandchildren. His sister’s children; nephews tom, Phil and Don, along with their wives and children have always been a big part of Arnold’s life. Whether at home, dancing, skiing, on trips, or serenading his wife of 40 years, he will be missed most of all by Rolande. Love was always so present between them, no matter where they were, but she admits that she told Arnold many times, “When you wear black pants and a white shirt, you bring out the romance in me and you are simply irresistible. Arnold is survived by his wife, Rolande; sons, Steven Berlage of Seattle, Washington, James Berlage of Gladbeck, Germany and Brian, (wife, Hakie) of Federal Way, Washington; stepson, Tim Banks (wife, Sena) of Nampa, Idaho; stepdaughters, Patty Martin of Odessa, Washington, Kathy (husband, Kyle Thoren) of Everett, Washington, Terry (husband, Bill Proper) of Monroe, Cheryl (husband, Gary Jones) of Eugene; granddaughters, Adrianne Berlage, Jessica (husband, Mathew Gallien) of Everett, Washington, Rachel and Conor Henderson of Eugene, Ashley Fox, Jennifer Ware and, Christine Ware of Corvallis, Hallie Berlage and grandson Cees Berlage; granddaughter, Jamie (husband, Jerrad) Gametski and great-grandchildren, Natalie and Parker of Federal Way, Washington; stepgrandsons, David Glenn of Monroe, Washington, Wesley Banks of Corvallis and Justin Carlson of Marysville, Washington; stepgranddaughters, April (husband, Don Strebeck) of Odessa, Angela (husband, Josh Thayer) of Everett, great-granddaughters, Olivia and Avery Henderson of Eugene, Andrea Athill of Eugene; step-great-grandsons, Keith and Chad Strebeck of Odessa; nephews Tom Scheideman (wife Peggy) of Oregon City, Oregon, Phillip Scheideman, Beaverton, Oregon, Don Scheideman (wife, Kathy) of Vancouver, British Columbia, Canada; and several grandnieces and grandnephews Arnold was preceded in death by his parents, Arnold & Maria Berlage and his sister, Mary K. Scheideman. In lieu of flowers, donations in Arnold’s name may be made to St. Jude's Children's Research Hospital, P.O. Box 50, Memphis, TN 38101. Please share your thoughts and memories for the family at www.demossdurdan.com

The family of Arnold Gerhard Berlage created this Life Tributes page to make it easy to share your memories.