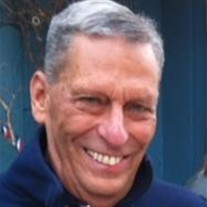 Arthur G. Johnson June 26, 1934- July 7, 2018 Arthur Guy Johnson was born in St. Louis, MO on June 26, 1934 to Charles Arthur Johnson and Pauline Lillian Johnson. He lived in the St. Louis area until his family moved to Kansas City, MO when he was 13. After graduating from Southwest High School, he spent 4 years at the University of Missouri where he attained an undergraduate degree in Biology. At the University of Missouri, he joined the Phi Delta Theta fraternity, maintaining lifelong friends and connections. Upon Graduation in 1956, He went to Officers Candidate School and entered the Army as a Lieutenant. He was on active duty for 2 years but remained in the reserves for several years and was officially discharged as a Captain on Nov 22, 1965. He then returned to college at the University of Missouri and received a Master of Science degree in Biology in 1960. Upon graduation he relocated to San Jose, California where he accepted a position with General Electric in 1960. At GE he began his work as a Health Physicist. Also while at GE he worked on the experimental reactor at Vallecitos and at the Dresden Power Plant in Illinois. In 1962, he married Jane Peterson and shortly afterwards accepted a position at the Atomic Energy Commission, (now the Nuclear Regulatory Commission). At the AEC he began his lifelong career of rules and regulations regarding nuclear radiation and making sure they were followed to the letter. In 1966 he accepted a position at Oregon State University as the Senior Health Physicist and Assistant Professor at the Radiation Center, specifically for the new Nuclear Reactor on campus. He was instrumental in the development and beginning of the Health Physics and Nuclear Engineering curricula at OSU. At the Radiation Center he rose to full professor and taught many classes in Nuclear Engineering and Health Physics. He became the director of the Radiation Center in 1986. He worked at OSU for a total of 28 years, and upon retirement in 1994, he then worked as a consultant for the U.S. Air Force for 10 additional years. Art was an avid fisherman, golfer, and musician, playing the guitar, mandolin, and piano by ear. He was also an all-around handyman, helping many friends, neighbors, as well as the Episcopal Church of the Good Samaritan. He was preceded in death by his parents and his son, Kent. He is survived by his wife Jane, his daughter Jennifer of Seattle, and granddaughters, Frances of Vancouver, WA and Catherine Johnson of Sedona, Arizona. There will be a service of remembrance 11:00 a.m., Saturday July 21, 2018, at the Episcopal Church of the Good Samaritan, 333 NW 35th St. Corvallis, followed by a reception. Contributions in memory of Art can be made to the Oregon Council of Trout Unlimited (www.tuoregon.org/donate) or to a charity of the giver’s choice. Arrangements by www.demossdurdan.com

The family of Arthur G. Johnson created this Life Tributes page to make it easy to share your memories.