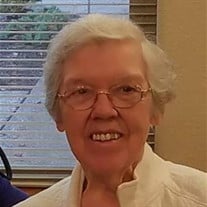 Audrey Colleen (Dodson) Plumb passed away at Harmony Senior Living in Adair Village, north of Corvallis, Oregon on November 4, 2018. Her kind heart, steady wisdom and funny wit will be dearly missed by her family and friends. She was born in Waldport, Oregon on December 4, 1934 to Sherrill and Leona (Grant) Dodson, the first of four children. She grew up in Harlan, west of Corvallis. She attended schools in Harlan and Eddyville, Oregon and left home at 16 to prepare for a teaching career at Oregon College of Education (now Western Oregon University in Monmouth). At age 19 she did her student teaching at Harlan. Audrey’s first teaching position was in Newport, but she soon returned to college, enrolling at the University of Oregon to complete her Bachelor’s and Master’s degrees. She was active in the Westside Christian Church in Eugene and felt the call to do missionary work in South America. Under the auspices of the Christian Mission Fellowship, she left for Sao Paulo, Brazil in 1962, where she taught elementary school. In 1966 she married Rubens Fenner and together they returned to the U.S. in 1967. The marriage was short lived and Rubens returned to Brazil. She continued her teaching career at Alsea Elementary School and then at Riverside Elementary near Albany. She moved to Philomath and taught there until 1982. In 1979 Audrey married Bernard Plumb, the widowed minister of the Suburban Christian Church in Corvallis. During this period of her life, she began to fill the role of pastor’s wife and mother of Bernard’s daughter, nine-year-old Lisa, whom she adopted soon after their marriage. Bernard also had four children who were young adults when Audrey married into the family. Bernard was called to be the minister of a new congregation being established at Shady Cove in 1982. They lived in Southern Oregon for nine years and Audrey concluded her teaching career at Elk Trail Elementary in Trail, Oregon. After retiring, they returned to Corvallis in 1993 to support and care for her parents in their senior years. In retirement, Audrey and Bernard enjoyed many travels including a trip to the United Kingdom, where Audrey reconnected with her Scottish roots. They also took an eight- month road trip around the U.S., pulling their fifth wheel trailer and visiting many historic sites. Audrey’s life was centered in Jesus Christ and service to His Church. She was active in church Bible schools, Mothers of Preschoolers (MOPS), vacation Bible schools, playing piano for worship, church dinners and social activities. She loved her family and kept track of them faithfully. She valued her roots in the Harlan area and maintaining family connections, both to the living and those who had passed on. She enjoyed honoring and remembering them by visiting cemeteries to place flowers on the graves of family members. She was proud of her pioneer heritage and her ancestors who came to the area on the Oregon Trail. Her husband, Bernard preceded her in death in 2015. She is survived by her daughter, Lisa Plumb and John Jessop and their children Emilio, Ben and Emily; Mark and Kat Plumb; Bruce and Nancy Plumb and their children Tone' Plumb and Shari Fulkerson; Janice Stillman and her children Robert Stillman and Aaron Stillman; Phillip Plumb and his children Jason Plumb and Kristen Blanchard and many great grandchildren, nephews and nieces. She is also survived by three siblings: Berwyn Dodson, Shirley Moore and Grace Matsutani. A memorial service will be held at Suburban Christian Church in Corvallis, Oregon on Saturday, December 1 at 2 p.m. Memorial gifts may be made to International Disaster Emergency Services (IDES) at PO Box 379 Noblesville IN 46061 or www.ides.org.

Audrey Colleen (Dodson) Plumb passed away at Harmony Senior Living in Adair Village, north of Corvallis, Oregon on November 4, 2018. Her kind heart, steady wisdom and funny wit will be dearly missed by her family and friends. She was born... View Obituary & Service Information

The family of Audrey Colleen Plumb created this Life Tributes page to make it easy to share your memories.