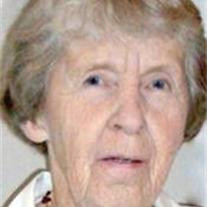 Longtime Corvallis resident Barbara Ann Jensen died Saturday, March 19, at Good Samaritan Regional Medical Center. She was 79. Barbara was born to Andrew and Helga Hald Brandt in the Danish community of Solvang, Calif., where she lived until the summer of 1944. Her family then moved to Oregon, settling in the Junction City area. Barbara graduated from Junction City High School in 1949. In the fall of 1949, Barbara enrolled at Grandview College in Des Moines, Iowa, where she sang in the choir. In the summer of 1950, she married Leland Jensen, also of Junction City and a fellow classmate at Grandview. They remained in Des Moines for the next school year, then returned to Oregon in the fall of 1951, when Lee enrolled at Oregon State College. Upon Lee's graduation in 1954, they moved to Albuquerque, N.M. After one year in New Mexico, they returned to Corvallis when Lee accepted a professorship at Oregon State. Except for a short period in 1961 and 1962, Barbara and Lee remained in Corvallis. Barbara was a talented pianist, and often played the piano to relax. She also loved to garden. Mostly, she was a devoted homemaker and mother to her six children. She was active in PTA and Scouts, and was always quick to volunteer in support of her children. During retirement, Barbara and Lee were active in the Danish Brotherhood in America. They attended many Danish Brotherhood events throughout the country. Barbara and Lee also traveled during retirement, including cruises in the Caribbean and Alaska, and a trip to Denmark. Survivors include her husband, Leland, of Corvallis; daughters Ellen Marmon and her husband, James, of Crow, Kathryn of Tualatin, and Gayle of Portland; sons Paul and his wife, Gaynelle, of Camas, Wash., David and his wife, Laurie, of Philomath, and Mark and his wife, Nancy, of Oregon City; 11 grandchildren; four great-grandchildren; and one great-great-grandchild. Barbara is also survived by her brothers and sisters, Gerald Brandt and his wife, Evelyn, of Suttons Bay, Mich., Judith Grotte of Portland, Rosalie "Sally" Reed and her husband, Bruce, of Bellingham, Wash., Ronald Brandt and his wife, Lindy, of Glendale, and Dennis Brandt and his wife, Donna, of Bellfountain. Barbara made friends easily, and was loved by many. All who knew her will cherish memories of their time with her. Services will take place at 2 p.m. Saturday, March 26, at Peace Lutheran Church in Philomath. In lieu of flowers, the family is suggesting donations to the National Parkinson Foundation.

The family of Barbara Jensen created this Life Tributes page to make it easy to share your memories.