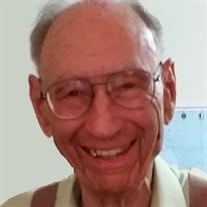 July 28, 1926 — Dec. 24, 2015 Bernard E. Plumb was born in LaCygne, Kansas, on July 28, 1926, the youngest of eight children born to James Royal and Violet Frank (Arnett) Plumb. He went to be with his Lord on Dec. 24, 2015. He grew up and was educated in the LaCygne schools. He was drafted and served in the U.S. Army during World War II in the Philippines, Japan and California. On Jan. 13, 1946, he married Betty Roberta Childs at Bolivar, Missouri. To this union were born five children: Mark, Bruce, Janice, Phillip and Lisa. He and Betty graduated from Pacific Bible Seminary. He pastored churches in California, Texas, Kansas and Oregon during a 42 year period. Betty passed away in 1978. He pastored Suburban Christian Church in Corvallis from 1975 to 1982, where he met and married Audrey Colleen Dodson Fenner on March 18, 1979. He was called as the first pastor to a new church plant, Church of Christ in Shady Cove, Oregon. After retiring and moving back to Corvallis, he was an active member of Suburban Christian and belonged to Timberhill Athletic Club. Bernard had a pastor's heart, he loved and cared for people in all his activities until the very end of his life on earth. He is survived by his wife, Audrey of Corvallis; children Mark and Kat Plumb of Burlington, Washington, Bruce and Nancy Plumb of Branson, Missouri, Janice Stillman of Racine, Wisconsin, Phillip Plumb of Lake Stevens, Washington, and Lisa Plumb and Jack Jessop of Eugene; 15 grandchildren; 17 great-grandchildren; sisters-in-law Shirley Moore of Portland and Grace and Ose Matsutani of Anchorage, Alaska; brother-in-law Berwyn and Lois Dodson of Medford; and many nieces and nephews. A memorial service will be at 2 p.m. Saturday, Jan. 2, 2016, at Suburban Christian Church in Corvallis. In lieu of flowers, the family suggests remembrances to International Disaster Emergency Services, PO Box 379, Noblesville, IN 46061 (www.ides.org).

The family of Bernard Eugene Plumb created this Life Tributes page to make it easy to share your memories.