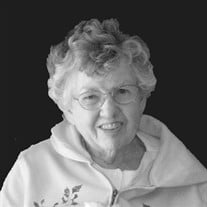 Bessie (Bess) L. Przybyla 1919 — 2014 Bess was born Aug. 13, 1919, to John and Agnes Powers in St. Clair, Michigan, with her twin sister, Betty, to whom she remained close throughout her life. As girls they dressed alike and their identical nature allowed them to exchange places at will. After their father passed away in the 1930s while Betty was suffering from tuberculosis, Bess tirelessly worked as a teenager as the sole source of support for her mother. She developed lifelong convictions that all members of society should be supported in their efforts to survive and make a better life for themselves. Bess met Dick, who was to be her husband of 63 years, at Diamond Crystal Salt. After marrying, they moved to Midland, Michigan, where Dick worked at Dow Corning as an engineer while Bess worked as a secretary at Dow Chemical. Bess quit her job to became a homemaker when their first son, John, was born. Bess actively embraced the role with a dignity and elegance reminiscent of a previous era. In Midland they raised three children, John, Jim and Anne, taking summer vacations at the lake and winter trips to Florida in a travel trailer. Bess stayed close to her family, and a typical family outing was spending the weekend traveling across Michigan to visit relatives, and stopping at small, out-of-the-way antique and junk shops, searching for under-appreciated treasures. Bess traveled extensively, accompanying Dick on many memorable trips abroad. After Dick’s retirement, they spent a year crisscrossing the United States with a trailer in tow before divesting themselves of a huge collection of antiques, selecting only the best pieces to take to their new home in Morro Bay, California, in 1985. When Dow Corning offered Dick an overseas consulting assignment, they picked up again and spent a year in Asia, living in Seoul, Korea and Taiwan, and visiting scores of countries. After 25 years in Morro Bay, where Bess was active in several clubs, Bess and Dick moved to Corvallis in 2011 to be closer to the support of their daughter-in-law Jill and son Jim. Bess enjoyed playing bridge and also was an avid crafter and reader, belonging to clubs for all three topics. Her other hobbies included collecting and restoring antiques and traveling. She was active in the Catholic Church and always generous in her support of the needy. Bess died of natural causes on Sept. 22. She was preceded in death by her father, John Powers; mother, Agnes Powers; twin sister, Betty; and sisters Marion and Florence. She is survived by her husband, Dick; sons John and his wife Linda, and Jim and his wife Jill; daughter, Anne, and her husband Paul; and nine grandchildren, Ben, Laralynne, Richie, Jacob, Becki, April, Jaime, Chris and Stephanie. A memorial service will take place at 1 p.m. Friday, Oct. 3, at DeMoss-Durdan Funeral Home at 815 Buchanan Ave. in Corvallis.

Bessie (Bess) L. Przybyla 1919 &#8212; 2014 Bess was born Aug. 13, 1919, to John and Agnes Powers in St. Clair, Michigan, with her twin sister, Betty, to whom she remained close throughout her life. As girls they dressed alike and their identical... View Obituary & Service Information

The family of Bessie Lucille Przybyla created this Life Tributes page to make it easy to share your memories.