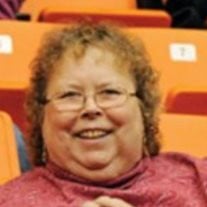 Beth Phelps Ray August 18, 1946- March 21, 2014 Beth Ray, the wife of Oregon State University President Ed Ray, died Friday evening after a long battle with lung cancer. She was 67. Almost immediately, the tributes began to the woman who had been married for 44 years to Ray but who was respected in her own right as a former business law professor, academic counselor and assistant dean of academic advising. She was respected and well-loved by students and colleagues. “During her time at Oregon State, Beth contributed in many lasting and very personal ways,” said Sabah Randhawa, the OSU provost and executive vice president. On Jan. 13, the $14 million Student Success Center was renamed the Beth Ray Center for Academic Support as a tribute to her lifelong commitment to students. It was the Oregon State Student Athlete Advisory Committee that suggested changing the name of the center, which is an academic home base to athletes and other students in need of additional tutoring. More than 200 people paid tribute to Beth Ray at that ceremony. And although she was visibly frail, she exchanged hugs and pleasantries with them. At the time of the dedication, OSU Foundation President Mike Goodwin got a laugh when he contrasted her impact on university donors with her husband’s “While everyone admires and respects Ed, they lo-o-o-ve Beth,” he said. She addressed the crowd with heartfelt emotion that frankly addressed her reality: “Most of my career has involved working with students and helping them through lots of different kinds of troubles students can have,” she said. “Sometimes you need a kick in the butt, and sometimes you don’t. “I’ve had a great life doing that and loved being out here because I’ve met so many people who are in love with students, just like I am.” The audience rose as one in applause and tribute. Beth Ray arrived at OSU in 2003 when her husband was named OSU’s 14th president. Born Aug. 18, 1946, Ray was raised in Prairieton, Ind. She received a bachelor of arts in English and philosophy from Rice University in 1968, and a law degree from Ohio State University School of Law in 1972. Ed and Beth Ray have three children: Michael Ray, Katherine Hall and Stephanie Pritchard. A celebration of Beth Ray’s life has been tentatively scheduled for June 2 on campus. The family requests no flowers but suggests those wishing to honor Beth consider a gift to the Ed and Beth Ray Choral Leadership Endowment or the Ed and Beth Ray Scholarship Endowment at the OSU Foundation, or a gift to the Good Samaritan Hospital Foundation to support programs treating childhood cancer.

The family of Beth Phelps Ray created this Life Tributes page to make it easy to share your memories.