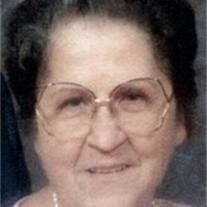 Betty Jean Carter of Philomath, one week shy of 83, died peacefully in her sleep at 2:10 p.m. Oct. 20, 2009, at the Mennonite Home in Albany, surrounded by family and friends. Betty was born to Stephen and Viola Clymer in Byron, Mich. She met Richard "Dick" Carter in 1959. They were married on Oct. 11, 1960, in Louisville, Ky. Dick supported the family so Betty could pursue her dream of becoming a ceramist. She began her own ceramic studio in the barn in the backyard in 1964. Her business, Orchard Lake Ceramic Supply, Inc., grew to become the second-largest ceramic studio in the state of Michigan. Due to a heart attack in 1971, she downsized her business, first to a small storefront, and then back to the barn. In 1974, she became a traveling teacher for Mayco Paints. For four years, she taught other ceramic teachers how to teach various techniques using their paint. In 1976, she and Dick moved their family to Oregon, Dick's birthplace. There Betty continued to teach ceramics until cancer hit in 1983. With all the children moved away, she and Dick moved to the country. After beating cancer, she continued to teach ceramics in a small shop called Carter's Creations in the backyard. She leaves a large legacy of ceramics, porcelain dolls, lace draping, china painting, oil painting, quilts, crochet, embroidery and much more. Most of her creations were generously given to friends and family over the years. She will be fondly remembered for all the beautiful items she created, and her generosity. Betty leaves her husband, Richard "Dick" Carter, 79; and four children, her son, David Bowen, 63, wife, Sharon, and children Kimberly, Kelly, Eric, Keith and Dana Bowen, Tanya Haywood and David Shaw; her oldest daughter, Linda Randall, 60, and children Michael and Cory Armstrong, and Sarah and Ryan Randall; her next daughter, Susan Wieneke, 48, and children Allysa and Jason Wieneke; and her youngest daughter, Jodie MacLean, 47, and husband, John. She also has one great-great-grandchild. She was preceded in death by a grandson, Danny Armstrong. A memorial service will be at 1:30 p.m. Nov. 1 at College United Methodist Church, Philomath, where she was a member. The church's pastor, the Rev. Bill Seagren, will officiate. In lieu of flowers, contributions can be made to the church, 1123 Main St., Philomath, OR 97370, or call 929-2412.

Betty Jean Carter of Philomath, one week shy of 83, died peacefully in her sleep at 2:10 p.m. Oct. 20, 2009, at the Mennonite Home in Albany, surrounded by family and friends. Betty was born to Stephen and Viola Clymer in Byron, Mich.... View Obituary & Service Information

The family of Betty Carter created this Life Tributes page to make it easy to share your memories.