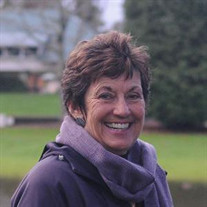 Sept. 23, 1940 — Nov. 18, 2014 On Nov. 18, Betty Griffiths, 74, of Corvallis passed away on her own terms, of pancreatic cancer. She was born on Sept. 23, 1940, in Boston, Massachusetts, to Ruth and Joseph Harrington. She attended public schools in Alexandria, Virginia, and continued her education at James Madison University, where she graduated with a degree in sociology and psychology. Betty met Bob in 1964 and married him the following year. While he worked on a master’s degree, she worked as a secretary at Stanford University. In 1968, she and her husband moved to Corvallis, where she finished a master’s degree in counseling at Oregon State University. In 1974, they had a son, who is now married and working as a hydrologist in Flagstaff, Arizona. Betty worked for more than 25 years in the field of human services and mental health, spending most of that time as the director of alcohol and drug treatment for Linn County, and volunteering for many organizations such as Community Outreach, Corvallis Community Day Care, Corvallis Neighborhood Housing Services and neighborhood groups to assist low-income residents. From 1992 to 2006, she served on the Corvallis City Council, including service as president and vice president. On the council, she was a champion of sound planning in support of neighborhoods, increasing open space and advocating city sustainability. She also advocated for increasing local and state support for parks, affordable housing and other social services. She tirelessly worked with the Greenbelt Land Trust to promote green spaces in and around Corvallis. Betty was instrumental in establishing and promoting the Friends of Corvallis Parks and Recreation. Betty had a passion for all things outdoors, including canoeing, whitewater rafting, skiing, biking and backpacking. She also loved to travel, visiting many foreign countries and traveling extensively within the United States. Over the years, she made a great number of close friends who will greatly miss her humor, loyalty, intelligence, sense of civic involvement and the ability to have fun regardless of what she was doing. A memorial service is planned for 7 p.m. Tuesday, Nov. 25, at First Presbyterian Church, 114 S.W. Eighth St., Corvallis. In lieu of flowers, it is suggested that donations in Betty’s name be made to the Greenbelt Land Trust Inc., 101 S.W. Western Blvd., Corvallis, OR 97333.

The family of Betty Griffiths created this Life Tributes page to make it easy to share your memories.