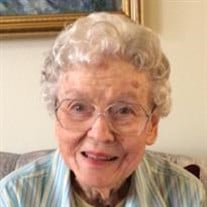 Betty June Taylor Owens died July 1, 2017 in Corvallis. She was born August 8, 1923 in Springfield, Illinois to Cleave B. and Mabelle C. Taylor. She attended Hay-Edwards Elementary, Springfield High School, Brown’s Business College and Lincoln Land Community College. She was a civilian employee of the U.S. Army Air Corps during WWII. She later worked in the family business and for the Illinois Board of Higher Education. She married Robert J. Owens on March 30, 1944 in Miami, and they celebrated their 70th wedding anniversary in 2014. They were members of West Side Christian Church in Springfield, Illinois. Betty volunteered throughout her life, including at Jacksonville State Hospital and Illinois State Museum, and taught lip-reading for several years. Her interests included reading, cooking, genealogy, and collecting antique china and porcelain. After retirement, she and Bob traveled around the United States, visiting grandchildren in Oregon and Tennessee, and touring England and Holland when their son was on sabbatical in Oxford, England. Family was the focus of her life. She was a devoted and dearly loved wife, daughter, mother, Grammie and Great-Grammie. After her husband’s death, she moved to Corvallis, where she resided at Timberhill Place until her death. She enjoyed many new friendships and time with family during her “new life” in Oregon.  Betty is survived by sons Robert J. (Mary Ann) Owens, Jr of Pittsburgh, Pennsylvania and William (Christine) Owens of Fishers, Indiana; daughter Nancy (Leslie) Pliskin of Corvallis; grandchildren Monica (Justin) Dugan, Taylor (Alyssa) Owens, Jessica Pliskin, and Benjamin (Whitney) Pliskin; and great-grandchild, Colin Dugan. She was preceded in death by her parents and husband, Robert J. Owens, Sr. Visitation will be Friday morning, July 14, at Bisch and Sons Funeral Home in Springfield, Illinois, followed by a graveside service at Oakridge Cemetery in Springfield. Robert J. Owens, Jr. will be the officiating clergy. In lieu of flowers, memorial donations may be made to American Macular Degeneration Foundation or the Assistance League of Corvallis.

The family of Betty T. Owens created this Life Tributes page to make it easy to share your memories.