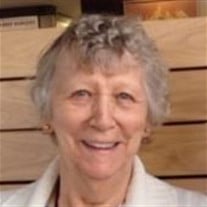 Betty Lou (Bonsell) Quant, a life-long Bend resident, passed away in Corvallis, Oregon on Monday, February 4 at the age of 85. Betty was born to Naomi and Dee Bonsell April 10, 1933 in Lusk, Wyoming. During the Depression, the family relocated briefly to two other Northwest towns before making Bend their permanent home, moving into the family home on Columbia Street. Betty started school at Reid Elementary in 1939 and graduated from Bend Senior High School in 1951. In July 1955 she married Joe Quant of Prineville. The couple settled in Bend for six decades before moving to Corvallis two years ago. Joe and Betty recently celebrated their 63rd wedding anniversary. Betty worked in several businesses in Bend, but was known best to those in the community as the office manager at Bob Thomas Chevrolet-Cadillac for over 20 years and then as the office manager at Central Oregon Council on Aging in Redmond until her retirement. After retiring, Betty and Joe would make travels to Europe, Mexico, Canada, Hawaii and Florida. For many years, they also enjoyed living in Arizona during the winter months as snow birds. As a parent, Betty would be seen at all her children’s Little League games, basketball games, gymnastics meets, and drill team performances. An avid Lava Bear fan and supporter, Betty was seen at many high school events enthusiastically cheering on her alma mater. Not one to just sit on the sidelines, one of Betty’s main loves was bowling. She rarely missed her weekly leagues at the local alleys and Betty forged many life-long friendships through her love of the sport. Being a staunch competitor, an excellent bowler, and perpetual member of the 600 Club, she kept participating until recently. Betty is survived by her husband, Joe; daughter Becky Russell, of Corvallis; son Ron Quant (Shirley Skidmore) of Tigard; daughter Kathy Hetzel (Gary) of Littleton, Colorado, and brothers Tom of Port Orchard, Washington and Bob of Vancouver, Washington, four grandchildren and seven great grandchildren. A memorial service for Betty will be held in May at Conifer House in Corvallis. Please share your thoughts and memories for the family at www.demossdurdan.com

Betty Lou (Bonsell) Quant, a life-long Bend resident, passed away in Corvallis, Oregon on Monday, February 4 at the age of 85. Betty was born to Naomi and Dee Bonsell April 10, 1933 in Lusk, Wyoming. During the Depression, the family relocated... View Obituary & Service Information

The family of Betty Lou Quant created this Life Tributes page to make it easy to share your memories.