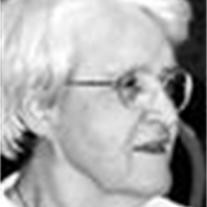 Beulah Richards, who had been in poor health for many months, passed away quietly in Corvallis on Oct. 9. She was preceded in death by her parents, Henry Joseph Thorpe and Mary Parthena Reed Thorpe, her two siblings, and her husband, Clyde Griffith Richards (who died in 1991). Born during her family’s several-year sojourn in Puyallup, Wash., where her dad taught school, she moved when she was 3 years old with her parents and brother and sister back to their native Ohio. They returned to Wayland in the northeastern portion of the state. Beulah grew up there, graduated from high school and then business school, and went to work in the Akron, Ohio, office of Pittsburgh Plate Glass. Through the efforts of a friend, during World War II she began a correspondence with a soldier who was born and raised in Ohio, Clyde Richards, with whom Beulah shared an ancestor several generations back. Clyde was stationed mostly in the Philippines, and when he was wounded and returned to Colorado Springs for treatment and recuperation, Beulah (and her mother) traveled to Colorado and Clyde and Beulah married. Soon afterward, when he was discharged from the army in 1945, the young couple settled in Corvallis, to which place Clyde had moved with his parents in 1928, when he was 19. Clyde and Beulah lived in the house which Clyde had earlier built, just west of the university. During their married life they remained in Corvallis and had two children, Alan Thomas (wife Ann Musché, stepson Jay Mahnke, Naselle, Wash.) and Mark Joseph (wife Robin and sons Halden and Corey, Seattle). Clyde worked as a projectionist, and Beulah was a homemaker who took an active part as a volunteer in her community. One of her proudest achievements was her leadership in procurement and development of the Girl Scout Camp, Whispering Winds, near Kings Valley. She was active in this effort for more than 20 years, starting about 1960. Beulah moved in January 2000 from her home, in which she had lived independently, gardening and working for her favorite causes (First United Methodist Church, Santiam Girl Scout Council, Benton County Literacy Council), to Heart of the Valley retirement home. Recently Beulah moved to a lovely foster home, where she had specialized care for her last weeks. A memorial service will be held at 11 a.m. on Friday, Nov. 2, at First United Methodist Church, 11th Street and Monroe Avenue, in Corvallis.

Beulah Richards, who had been in poor health for many months, passed away quietly in Corvallis on Oct. 9. She was preceded in death by her parents, Henry Joseph Thorpe and Mary Parthena Reed Thorpe, her two siblings, and her husband, Clyde Griffith... View Obituary & Service Information

The family of Beulah Thorpe Richards created this Life Tributes page to make it easy to share your memories.

Beulah Richards, who had been in poor health for many months,...