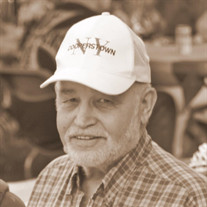 William “Bill” Learn Sr. Bill Learn Sr. a resident of Blodgett, Oregon passed away on September 4th, 2017 of natural causes. Bill is survived by his sisters Bertie Dayton of Roseburg Oregon, Anita Nevil, and, brother Gene Learn of Pennsylvania, daughters Pam Perini of Springfield, Oregon, Denise Manassa of Pensacola, Florida and son and daughter in law Bill and Cheryl Learn Jr. of Blodgett, Oregon. Survived also by grandchildren Zac Perini, BreAnna Manassa, Jazmine Lynn, Geoffrey Learn, KaReena Manassa and Caleb Manassa, great grandchildren Adriahna Perini, Zachary Perini and Noah Perini. Bill was preceded in death by parents Earl and Naomi Learn of Stroudsburg, Pennsylvania and granddaughter Adie Perini of Drain, Oregon. Bill was born on June 9th 1937 to Naomi and Earl Learn in East Stroudsburg Pennsylvania. Bill graduated from Stroudsburg High in 1956 and joined the Marines on September of that same year. Bill served as an aircraft electrician until 1960 and then as a reservist for the next 10 years. Bill returned to Stroudsburg to work at the local A&P and the roller skating rink. During this time he also had a local bread route where he is still remembered today by some of his customers. Bill found his way to California in the mid-1960s where he spent the next few years managing a Chicken Delight restaurant and working for the Postal Service. Bill moved to Rice Hill, Oregon in 1971 where he worked on the family ranch while attending Umpqua Community College earning his degree in Horticulture. Bill moved to Reno, Nevada in 1982 to pursue a career with the University of Nevada, Reno in the Agriculture Department. Bill worked at UNR for 15 years running the sheep, cattle and hog units while also managing the production of various crops. Upon his retirement Bill returned to Oregon to live with his son Bill Jr. and his family in Blodgett, Oregon. Bill was an avid rancher and baseball fan spending much of his life outdoors with livestock and watching and coaching baseball. He became a member of Fitness Over Fifty where he built lifelong friendships. Memorial services will be held at the Blodgett Community Church on Saturday September 9th at 10:00am with pie and refreshments after. Graveside services will be held at Applegate Pioneer Cemetery in Yoncalla, Oregon at 2:00pm on September 9th. Please share your thought and memories for the family at www.demossdurdan.com

The family of Bill Learn created this Life Tributes page to make it easy to share your memories.