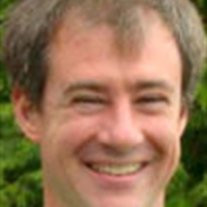 Brian Edward Smits, Feb. 20, 1968 — June 28, 2013 Brian was an amazing man and friend to all. He was extremely supportive, creative and determined. Brian touched the lives of so many people and he did incredible things in his 45 years. He will be greatly missed. Brian unexpectedly died of a cardiac complication while mountain-biking in the woods he loved. Brian was born on Feb. 20, 1968, in Minneapolis, Minn. He spent his early childhood in Indianapolis and moved to Monmouth in 1978. In 1986 he graduated from Central High School in Independence with high academic achievements and varsity letters in cross-country and track. He graduated four years later from University of Oregon and then went on to receive his doctorate in computer engineering from Cornell University. Brian worked as a computer software engineer for Pixar Studios, most recently from his home office in Corvallis. On May 29, 2004, Brian married the love of his life, Jennifer Nelson. In 2007, they moved from the Bay Area to Corvallis to be closer to family. Together, they created their dream home and garden where they could grow their own food and raise their kids in nature. Family was very important to Brian. At the center of his world were his wife and their children, Rebecca and Dylan. Brian loved anything outdoors. He was an incredible gardener, photographer and cook. He loved biking, running, hiking, swimming, backpacking and cross-country skiing. He was so happy to be able to include his family in these activities as much as possible. Brian is survived and will be deeply missed by his wife, Jennifer; children, Rebecca, 7, and Dylan, 4; parents, Steve and Kathy Smits of Monmouth; sister, Aimee Williams, and brother-in-law, Mark Williams, and their children, Dacia and Keaton, all of Corvallis; as well as many aunts, uncles, cousins, extended family and friends. A celebration of Brian’s life will take place at 10 a.m. Wednesday, July 3, at the Smits’ residence. The family would like to thank the Corvallis Emergency Medical Service, the staff at Good Samaritan Regional Medical Center, and all the caring friends and neighbors for their kindness and support. The family asks that, in lieu of flowers, donations be made to the Brian Smits Memorial Fund in care of Jared Moore, 200 Bexell Hall, Corvallis, OR 97331.

Brian Edward Smits, Feb. 20, 1968 — June 28, 2013 Brian was an amazing man and friend to all. He was extremely supportive, creative and determined. Brian touched the lives of so many people and he did incredible things in his 45 years. He... View Obituary & Service Information

The family of Brian Edward Smits created this Life Tributes page to make it easy to share your memories.