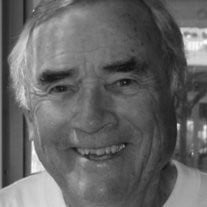 Brian Gerald Spreadbury September 20th, 1937 – October 30th, 2013 Brian Spreadbury died peacefully in his sleep at Good Samaritan Hospital in Corvallis, Oregon after an extended illness. Brian was born in Aldershot, England to Winifred Margaret and Leslie Robert Spreadbury. Brian’s father was in the Royal Engineers, and the family was stationed in Singapore during the start of WWII. During the fall of Singapore, Brian, his mother, and three brothers were evacuated back to the UK for the duration of the war. The family finally settled in New Milton, England where he finished his primary school education. In 1962, Brian graduated from Bournemouth Technical College with a Higher National degree in Mechanical Engineering. Brian went to work at Flight Refuelling, an innovator in in-flight refueling systems in aircraft as a Development Engineer. During this time, he met his future wife, Barbara and they married in 1963. Brian always had a thirst for adventure, and when an opportunity arose to come to the United States to work for Boeing, he seized the chance. Recruited to work on Boeing’s Super Sonic Transport (SST), and when that project was cancelled, he went to work for Sunstrand Data Control in Redmond, Washington. Both of their sons, Michael and Keith were born in Seattle, and the family enjoyed exploring the Pacific Northwest. During this time, Hewlett Packard advertised in Seattle for mechanical engineers and recruited Brian to work at their Corvallis campus. Brian thrived at HP and retired as a Research & Development Engineer in 2000. Brian’s retirement years were spent travelling the world with Barbara, or exploring the Western US in their VW camper, working on his beautiful “English Garden”, and tending to his Schnauzer’s happiness. Brian was a man of deep Christian faith, and was a member of the Life Center Church of Independence, Oregon. A Celebration of Life is planned for Monday, November 11 at the Adair Village Officers Club, 6097 NE Ebony Ln, Corvallis from 2-4 p.m. Brian is survived by his wife of 50-years, Barbara, and sons Michael (Keri) from Corvallis and Keith (Michelle) from Monmouth, and grandchildren Sara, Brice, Olivia, and Aidan. The family suggestions that memorial contributions be made to: The Good Samaritan Hospital Foundation Survivorship Fund 3600 NW Samaritan Drive Corvallis, OR 97330

The family of Brian Gerald Spreadbury created this Life Tributes page to make it easy to share your memories.