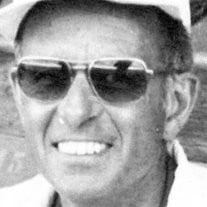 Carl B. (Berny) Wagner Sept. 30, 1924 — May 27, 2013 “Track is my life, and it belongs at Oregon State.” After seeing the new Oregon State University track inaugurated, and the first OSU home meet in 24 years on the new track, Berny peacefully passed away on May 27, 2013. He was 88 years old, and his family was at his side. His pleasure and passion in his last years was time with family and friends, and serving as an instrumental contributor in bringing track and field back to Oregon State. Berny was born on Sept. 30, 1924, in Fresno, Calif. The family later moved to Palo Alto, where Berny graduated from Palo Alto High School. Following high school, he attended California Institute of Technology and Stanford University, then served in the U.S. Navy during World War II, before graduating from Stanford with a degree in education in 1948. He received his master’s degree in education from Stanford in 1949. In 1947, Berny married the love of his life, Nancy Elizabeth Peterson, to whom he was married for more than 50 years. Berny’s coaching career began at the high school level, with stops at Wheatland, Lodi, San Lorenzo and San Mateo high schools. In 1962, he became track and cross-country coach at College of San Mateo, where his dual meet record was 29-2-1, with conference championships in 1964 and 1965. Wagner’s cross-country teams at San Mateo also won championships in 1963 and 1964, with a combined meet record of 25-1. Berny recently was inducted into the College of San Mateo Hall of Fame. In 1965, Berny became head track and cross-country coach at OSU, a position he held for 10 years. He developed 25 All-Americans in 12 different events at OSU, and his Beaver teams included 10 NCAA or open-meet national champions. The Beavers finished six times in the top 20 at the NCAA championships, and in the top 6 four times. Athletes developed under Wagner’s watch included such standouts as 1968 Olympic gold medalist Dick Fosbury, whom he supported in developing the Fosbury Flop, a jumping style that revolutionized the high-jump event and which is universally used by high-jumpers today. Berny left OSU to work with the Whittaker Corporation in Saudi Arabia, helping that country develop a national track and field program. During that time, he also was the men’s jump coach for the 1976 USA Olympic team. From 1978 to 1981, he worked as executive director of Track and Field Association USA, where he was instrumental in ending the 22-year feud between the NCAA and track and field’s national governing body, the Amateur Athletic Union. From 1981 to 1989, Berny was national coach coordinator for the Athletics Congress, the forerunner of today’s national governing body for track and field, USA Track & Field, and volunteered his time to work with Special Olympics. After retiring in 1989, Berny volunteered his time as an assistant coach for Western Oregon University track teams, working with head coach John Knight. During his time at Western Oregon, Knight’s program produced three national champions and 15 All-Americans. Wagner was inducted into the OSU Athletic Hall of Fame in 1993, the U.S. Track & Field and Cross Country Coaches Association Hall of Fame in 2002, and the Western Oregon University Hall of Fame in 2009. Berny was preceded in death by his wife, Nancy, in 2001; his son, Carl, in 1989; his sister, Nonnie Hussa, in 2012; and a loving friend in his last years, Nancy Sippman. He is survived by his daughter, Erica Woodcock (husband Rollie); son, Jeff Wagner (wife Eileen); and grandchildren Sophie (Woodcock) Drisko, Lara Woodcock, Erin (Wagner) Sanderson (husband Daniel) and Tully Wagner. A tribute to Berny Wagner will take place at 6 p.m. Saturday, June 8, on the track at the new Whyte Track and Field Center in Corvallis. The family asks that remembrances be directed to the OSU Foundation, 850 S.W. 35th St., Corvallis, OR 97333. Donors should indicate their gift is for the Track & Field Complex in memory of Berny Wagner.

Carl B. (Berny) Wagner Sept. 30, 1924 — May 27, 2013 “Track is my life, and it belongs at Oregon State.” After seeing the new Oregon State University track inaugurated, and the first OSU home meet in 24 years on the new track, Berny... View Obituary & Service Information

The family of Carl Bernard Wagner created this Life Tributes page to make it easy to share your memories.