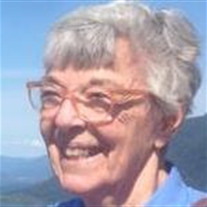 Carol Mixter Tormey – January 11, 1934 – February 26, 2018 Carol Mixter Tormey died at home in Corvallis, Oregon, February 26, 2018, primarily due to lung disease. It was a quiet ending to a life which had been full of friendship, hospitality, travel, leadership and making new homes. (She counted by kitchens – and set up 16+ in her adult life.) Carol Ann was born in San Francisco, CA to Frances Elizabeth March Mixter and Willard Herbert Mixter. Her sisters Lois Bennett of Pacific Grove, CA and Sally Brudos of Atherton, CA survive her. They grew up in the SF Peninsula towns of San Carlos and Atherton, watching that area go from sleepy to Silicon Valley in their lifetimes. Carol (“Mix”) graduated from Sequoia Union High School in 1951 where she was commissioner of girls’ athletics, and active on Student Court and cultural and athletic boards. She matriculated at UC Berkeley that fall, pledging Alpha Omicron Pi (Sigma chapter) sorority, which became the center of her college experience. She maintained friendships with her sorority sisters all her life through a Round Robin letter. “Cam” was Vice-President of the Associated Students UC Berkeley from 1954-55 (a position known as the hostess for the student body—it was the ‘50s!) and active in many other organizations, including the Women’s Judicial Committee and the YWCA. She knew both the Tormey boys from Jr. High, through her church youth group, and visited Peter when he had polio in HS, but didn’t date Michael Shane until after they were in college. Her sorority was the scene of happy parties in honor of her pinning and engagement. She married 3 days after her UCB graduation as an English teacher, with plans for a job (Carol) and grad school (Michael) in Cambridge, MA – plans derailed by the arrival of the first of her four children. Thus began a family-centered life that included 3 more children, homes on 4 continents and in 5 states on both coasts of the US. IBM (via Michael) controlled the itinerary, but at every stop Carol not only made a new home – sewing everything from curtains to school uniforms and figuring out how to grocery shop and get kids to their activities… in French, Aussie or Thai—but then took on leadership roles in a variety of volunteer organizations, as well as becoming a skilled hostess and gourmet cook. One lifelong regret was having to move continents after being elected to the presidency of the large American Women’s Club of Bangkok before her term could begin in 1974. Back stateside for a total of 13 years in Weston, CT, Briarcliff Manor, NY and Somers, NY, she worked at American Can, Readers Digest, a local bookstore and had a brief career with Girl Scouts USA, retiring in 1987 to accompany Michael to their last overseas assignment in China. In China she taught English to hotel workers, which led to a position in adult education with Haywood Community College in their retirement hometown of Waynesville, NC (1990-2014.) Carol was finally able to create a lasting garden and sew to her hearts content! She continued making a difference as an adult literacy volunteer, became a Haywood County Master Gardener and was so active in the Rotary Inner Wheel that she was honored as a Paul Harris Fellow. She also mentored and supported many recovering alcoholics during her 38 years of devotion to AA, taking leadership roles there as well. She followed the Golden Rule, enjoyed having lots of different kinds of people in her life and always tried not to be judgmental, or at least keep it to herself! Carol will be dearly missed by her children Kathleen (Chris) Rochester of Corvallis, OR, Sharon (Alan) Schwartz of Chattanooga, TN; Ellen (Charles) Smith of Atlanta, GA and Grant & Beth (Cheney) Tormey, of Moraga, CA. She also leaves grandchildren and step grandchildren: Katherine, Christopher and Eleanor Rochester, Kirsten Culbertson, Brianne, Casey and Dion Smith, Kate and Claire Tormey and great-grandson Cameron Gibson. She was sorry to never get to know Sharon and Alan’s newly-connected grandchildren and great grandchildren but enjoyed seeing their pictures so much. Michael, her husband of nearly 62 years, died in May 2017. His obituary is at http://www.mchenryfuneralhome.com/obituaries/Michael-Tormey/ Her family and friends were very spread out during all of Carol’s adult life, including many years when she was the farthest flung, but she and Michael made a huge effort to stay in touch long before email, maintaining a 200+ person Xmas list until late in life. Handmade quilts, afghans, Christmas stockings for all the grandkids, woodwork (from Dad), long trips by road and air to see children and friends, and a steady flow of greeting cards, let everyone know she never stopped thinking of them. The family would like to thank the staffs at both Stoneybrook Lodge and Regency Park Place Assisted Living for creating warm, inviting and supportive places to live. Both Carol and Michael commented often about the quality of their living arrangements and the kindness of the people around them over these past four years in Corvallis. In lieu of flowers, a donation may be made to the Sierra Club in Carol’s honor. She would also love you to stop smoking!

The family of Carol Mixter Tormey created this Life Tributes page to make it easy to share your memories.