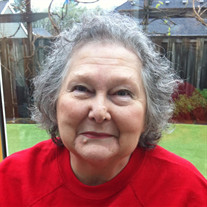 Carolyn G. McGinty Stevenson, 84, died on January 23, 2019, at Willamette Springs Memory Care in Corvallis, Oregon. She was born October 11, 1934, to Catharine and J. Roscoe McGinty in Mansfield, Ohio. She graduated from Portage High School in Portage, Michigan in 1951. Carolyn earned a Bachelor of Science degree in animal husbandry from Michigan State University in 1955. While a student at Michigan State, she was a member of both the Livestock and the Meats Judging teams, winning awards in both. A little known fact about Carolyn is that her first job out of college was at Hormel and included keeping the national scrapbook on SPAM updated. Carolyn met Joe Stevenson while both worked at Honneger’s in Fairbury, Illinois. They were married in Mansfield, Ohio on September 20, 1958. They settled in Illinois and their family quickly grew to six after they had four daughters in five years. Carolyn had a heart for service. While in Illinois, she was very involved in Presbyterian churches in Fairbury, Monmouth and Chenoa. She also served many years as a 4-H leader in Monmouth. A talented seamstress, she spent countless hours sewing and altering clothing for family, friends, and friends-of-friends. In 2003, the couple moved to Lebanon, Oregon, and after Joe died in 2008, Carolyn moved to Corvallis. Carolyn was preceded in death by her husband, her parents, one brother (Hugh McGinty) and a stillborn son (Andrew James). Surviving are her four daughters Cynthia Stevenson (Rick), Corvallis, OR; Hope Goering (Dick), Cedar Falls, IA; Stephanie Sidhom (Hany), Tacoma, WA; and Priscilla Schoenberg (Jeff), Cedar Lake, IN; eight grandchildren and four great grandchildren. Also surviving are her sister, Charlene Huber, Oil City, PA; her brother Patrick McGinty (Lisa), Redondo Beach, CA; and her sister- in-law Patricia McGinty, Mansfield, OH. A small family service is being planned for later in the year. Carolyn’s daughters would like to thank Willamette Springs Memory Care’s staff for providing Carolyn a safe and loving environment in the two years she lived there. They also thank Lumina Hospice for their support during the past four weeks. Memorials may be given to: Self Development Of People (SDOP) Presbyterian Church (U.S.A.) P.O. Box 643700 Pittsburgh, PA 15264-3700 http://pma.pcusa.org/donate/make-a-gift/gift-info/E051602/ Please share your thoughts and memories for the family at www.demossdurdan.com.

The family of Carolyn McGinty Stevenson created this Life Tributes page to make it easy to share your memories.