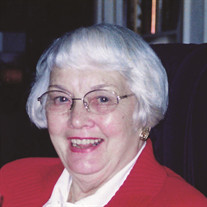 Catherine Cracraft, age 97, of Corvallis, died Thursday, December 26, 2019. Catherine was born in 1922 and raised in Corvallis Oregon, the daughter of Fred and Anna Fischer. Her father, Frederick built and operated the Fischer Flour Mill on the Willamette River. She and her younger brother William both graduated from Corvallis High School and Kay earned her Bachelors degree at Oregon State College. The family lost William in an aircraft accident during the Second World War—a loss from which Kay never fully reconciled. When the war ended, Kay married Lieutenant Edward M. Cracraft, a handsome Missouri transplant stationed at Camp Adair as a Flight Instructor. Kay and Ed settled in Corvallis--raising two children--Laurie Ann and Edward William (Chip), and celebrated 51 years of marriage together before Ed’s death in 1996. In the early years, Kay was a housewife and mother. She returned to teaching in 1961, earned a Masters degree in English and spent 23 years at Philomath High School teaching college prep English. Her classes covered grammar, composition, poetry, literature, and Shakespeare. Her enthusiasm inspired a generation of students—many of whom, with her encouragement, went on to college—a few even became English teachers themselves! Following retirement in 1984, Kay and Ed spent many happy years socializing with their good friends in Corvallis, as well as traveling overseas to countries in Eastern and Western Europe, Russia, and Australia. How does one do justice to a vibrant and complex life? Kay was a beloved wife, mother, successful teacher and community volunteer. She served as PTA president while her children were in elementary school; spent many years involved with fundraising projects for Alpha Gamma Delta Sorority; and devoted twenty years to the Assistance League School Bell Project. Kay loved dancing with Ed; she loved her French cooking classes and entertaining friends. She took great pleasure in seeing her children grow up, and gave her enthusiastic support for their interests and activities: when Chip played varsity basketball, Kay and Ed were there; when Laurie and Bonnie sang folksongs, she stopped by to listen; when term papers were due, Kay red-pencilled their compositions and helped them become proficient writers. Her kids learned a lot about Shakespeare, poetry and English history. Kay was an avid and voracious reader, often quoting lines or telling stories from English literature at the dinner table. Kay enjoyed shopping for clothes and was a sharp dresser—“Clothes make the man” she laughed, quoting Mark Twain, “naked people have little or no influence in society”. And…after a busy work week, when the house had to be cleaned on Saturdays—equal opportunity reigned long before that term existed—it didn’t matter who scrubbed the floors or cleaned the bathrooms—nobody could leave the house until it was clean—Ed included! Kay is survived by her daughter, Laurie of Eugene, Oregon and son, Edward (Chip) of Melbourne Australia. Laurie and Edward are grateful to Darla, Thaimi, Connie, and Aura—for their loving care given to Kay in the later years of her life. Family and friends are invited to her funeral service, 11:00 am, Thursday, January 9, 2020 at DeMoss-Durdan funeral Home, 815 NW Buchanan Avenue, Corvallis. Please share your thoughts and memories for the family at www.demossdurdan.com.

The family of Catherine Ann Cracraft created this Life Tributes page to make it easy to share your memories.