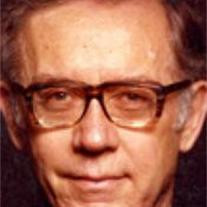 Nov. 15, 1926 — Sept. 28, 2012 Charles Alfred “Bud” Eldon, 85, of Corvallis died Friday. Born in 1926 in Tacoma, Wash., Bud moved to Hawaii in 1927 with his parents, when they returned to the place they had met. Bud grew up on Kaua’i near McBride Sugar Plantation, where his father was chief engineer, and went to Eleele Elementary School, where his mother Dorothy (“Dot”) taught. The family moved to Honolulu in 1939, and was there to experience the Pearl Harbor bombing on Dec. 7, 1941. Bud attended Iolani Episcopal School (for boys) and Punahou High School. But he left Punahou a year early, in 1944, before formally graduating, upon advice that he could complete a full year of college at Stanford University before being eligible for the draft. He was drafted into the U.S. Navy shortly after his 18th birthday, and spent nearly two years being trained as an electronics technician, then was sent back to Hawaii to be put in service at Pearl Harbor. He returned to Stanford in fall of 1946 and completed a Bachelor of Science degree in physics in 1948, followed by a Master of Business Administration degree in 1950. In March 1950, Bud married an undergraduate classmate, Betty Kahn, a sister of one of his fraternity brothers. In January 1951, he was hired by Hewlett-Packard Co., which at the time was a small company. He worked there as an engineer, and as a manager and executive at various operating divisions and at corporate headquarters until he retired in March 1990. During his working years, Bud did volunteer work for Stanford, where he was elected chairman of the Graduate School of Business Fund, and earned the highest recognitions and awards of the university for his leadership. Separately, at the direction of Mr. Hewlett, Bud joined what became the Institute of Electrical and Electronics Engineers. Elected to a series of leadership positions at local, then national levels, Bud ultimately was elected international president of IEEE in 1985, and to the Fellow grade of membership, the latter for his technical contributions “to manufacture high-quality electronic components and systems.” IEEE is the world’s largest professional society, and has grown to more than 400,000 members in more than 130 countries. In retirement, Bud became active in the Fort Huachuca Section in Southeast Arizona. Bud and Betty traveled extensively, first on business trips, and later with Elderhostel groups. During those retirement years, they happily lived in Sierra Vista, Ariz., where Bud soon became a volunteer at Ramsey Canyon Preserve and the Nature Conservancy. In philanthropic matters, he supported teachers of Science, Technology, Engineering and Math (STEM) in the Sierra Vista schools with both time and financial contributions. In March of this year, Bud and Betty moved to Corvallis. Bud is survived by his wife, Betty, and their four children, Tony (wife Anita and their children, Charlene and Evan); Kay; Doug (wife Dorry and their children, Eric, Jon and Annie); and Jim (wife Julie and their children, Miles and Ella). Bud’s younger brother, Scott, died last January; their parents died many years ago. There will be no memorial services; Bud’s ashes will be scattered in the Pacific Ocean off the coast of Hawaii.

The family of Charles “Bud” Eldon created this Life Tributes page to make it easy to share your memories.