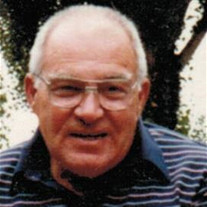 Charles Harold Kipper 6/29/1922 – 7/3/2016 Charles Kipper passed away in Corvallis on the morning of July 3, 2016 with family by his side. Charles was born on a farm near Clark, Missouri June 29, 1922, the fifth child of Charley and Leta Belle (Sebastian) Kipper. Charles lost his parents early in life. His foster family of Ewing, Missouri was influential in his early years. Following high school, Charles proudly served in the Civilian Conservation Corps in Winona, Minnesota as a medic. With the outbreak of World War II, he enlisted in the United States Navy in St. Louis, and did his basic training at Navy Pier in Chicago. Charles was stationed at Alameda Naval Air Station where he led an aircraft maintenance crew. He also managed the Naval Base’s championship baseball team. While on leave from northern California, Charles took a trip to Philomath to visit his Uncle Jesse and Aunt Eva (Shroyer) Kipper. On this trip he fell in love with the Willamette Valley, where he made his home for 70 years. Charles enrolled in Oregon State College in 1946. As a student he worked summers in the forest for the Shroyer family logging company. He graduated from OSC in the great class of 1950 as a member of the Honor Society of Phi Kappa Phi with two degrees, both Bachelor of Arts and of Science in Education. Charles met a graduate student, Virginia Carlson, at OSC also in the class of ‘50, receiving a Master’s in Home Economics. They were married on March 26, 1952 at the First Presbyterian Church where they remained life-long members. Charles continued his formal education, receiving his Master’s Degree in Education from OSC in 1955. Also that year they moved into their new home in the Cloverland Village subdivision in north Corvallis. In the first house on the block they welcomed their first son Robert, to be followed by Richard, and then daughter Janet. Many cherished family events would take place at the house on 29th street for 55 years. After serving as office manager for Mater Machine Works, Charles began his long and successful career in education, first at Philomath and then Corvallis School District. He taught mathematics with a particular interest in statistics and probability which served him very well in his passion for card games … any card game. At the time of his retirement from Corvallis 509J, Charles was the district’s Comptroller. During summers Charles performed audits for numerous school districts working for the CPA firm of Lou Ramus. He was also an IRS Enrolled Agent with many loyal tax clients. Charles was inquisitive and a lifelong learner. In his fourth decade he learned to swim and became a regular early morning swimmer where he made many good friends, first at the Benton County Family YMCA and later at the Osborn Aquatic Center. Charles was an avid sports fan beginning with his beloved St. Louis Browns and Cardinals, culminating with Oregon State Beavers. His wardrobe included much orange and black apparel. Charles was active in Kiwanis International and was a member of the Corvallis Country Club. Retirement led to travel, visiting every land-grant college in the United States as well as many trips abroad. Charles had a great love of family and could recite from memory the names of his many nieces and nephews from Idaho, Texas, and Missouri, with descendants now all across the country. Charles was preceded in death by his parents and siblings Minnie, Marie (Besel), David, and Opal (Thornborrrow), foster sisters Bessie, Effie, Eva and Pauline (Goins) Zuspann, Cousin Louis (Marge) Kipper, and sister-in-law Swannie Carlson. Charles is survived by his wife Virginia, two sons, Bob (Julie) and Rick, daughter Janet, granddaughter Jaelin Shattuck, brother-in-law Ted Carlson, nephews Ted (Wendy) and Eric (Kari) Carlson, niece Judy (Duane) Hulbert, cousins Karen (Victor) Earls, and Nancy (Larry) Underhill. Charles’ family would like to express their sincere gratitude to Nicholas Crowson, his devoted caregiver and to Benton County Hospice. Family and friends are invited to the visitation/viewing Tuesday, July 12, 2016 from 1:00-2:00 pm at DeMoss-Durdan Funeral Home, 815 NW Buchanan Ave., Corvallis. A Celebration of Life memorial service will be held 2:00 pm Thursday, July 28, 2016, at First Presbyterian Church, 114 SW 8th St., Corvallis. In lieu of flowers the family suggests donations to the Children’s Farm Home School, 4545 NE Hwy 20, Corvallis, OR 97330.

The family of Charles Kipper created this Life Tributes page to make it easy to share your memories.