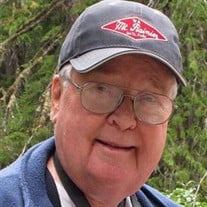 Charles David McIntire died on January 4, 2019, from complications from leukemia. He was 86 years old. Dave was born in St. Louis, Missouri, on Sept. 20, 1932 to Charles and Pauline McIntire. He grew up in the suburb of Glendale and described his childhood and parents as “perfect.” When he was in sixth grade, he took up the alto saxophone and began his lifelong love of jazz music. At the age of 13, the family, which now included his sister, Sharon, moved to the Dallas, Texas, neighborhood of University Park. He attended Highland Park High School where he primarily focused on his band activities. He was talented enough that when he was a senior he joined the musician’s union and a local professional band. These were great times for a kid still in high school. After high school, Dave enrolled at Southern Methodist University, just a few blocks down the street. He loved music but knew he would never make it his profession so he studied Business Administration, which he jokingly said later was mostly “monkey business.” He was a proud member of the SMU Mustang Band and in the summers began to play with a band at Yellowstone Park. The band members would work as porters during the day and play dance music in Old Faithful Lodge twice a week. At Yellowstone, he met another alto sax player, Ted Winberg, with whom he maintained a close friendship for over 60 years. After graduating SMU, Dave volunteered for the draft and eventually was assigned to a radar platoon and stationed with the 7th Army in Karlsruhe, Germany. His military life changed when he joined the 7th Army Jazz Band. The eight months he was with the Army band were quite memorable for Dave. When he was discharged, he moved to Corvallis to pursue a degree in fisheries. A Master’s Degree and then PhD in Botany and Plant Pathology followed. He met Carol Peyton after finishing his PhD and they were married in December of 1965. They raised three children in the following years, Kathryn, Mark and J.D. Dave and Carol spent those years enjoying OSU sporting events and eventually traveling the Western states as Carol pursued her interest in quilting and Dave developed a love for landscape photography that continued until his death. Dave retired in 1994 and devoted his time to his photography and doting on his grandkids. By the late 2000s, Carol began to develop dementia and Dave spent many years caring for her at home until she moved to Holistic Hands Adult Foster Care in 2013. Dave visited her there every day until her death in February of 2018. Dave’s respect for all living things, empathy for others and tremendous sense of humor defined him. Dave enjoyed his final years interacting with his friends in the Photo Arts Guild and traveling around shooting pictures with friends and family, including a memorable trip last June with his eldest granddaughter, Robyn. Dave is survived by his children, Kathryn Louden (Andy), Mark McIntire and J.D. McIntire (Rochelle); grandchildren, Robyn and Megan Louden, Reed and Erin McIntire, Shawn, Synthia, and Keesha Toney, and Devon and David McIntire. A reception celebrating the life and art of Dave McIntire will be held at 7 p.m. on January 26 at the Arts Center, 700 SW Madison in Corvallis. In lieu of flowers, the family suggests a remembrance to Yellowstone Forever at https://www.yellowstone.org/donate/.

Charles David McIntire died on January 4, 2019, from complications from leukemia. He was 86 years old. Dave was born in St. Louis, Missouri, on Sept. 20, 1932 to Charles and Pauline McIntire. He grew up in the suburb of Glendale and described... View Obituary & Service Information

The family of Charles David McIntire created this Life Tributes page to make it easy to share your memories.