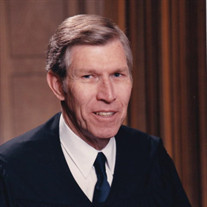 Charles L. Patrick, November 27, 1930 - February 9, 2021 On Tuesday, February 9th, Judge Charles Lee “Chuck” Patrick (retired), loving husband, father of three children and grandfather to four grandchildren, passed away in Corvallis, Oregon at the age of 90. Chuck was born in Fullerton, California on November 27th, 1930, and grew up in Anaheim. He attended Fullerton Junior College, then served in the U.S. Army from 1953 -1955 as a cryptographer prior to continuing his education. He graduated from UCLA in 1955, where he then began law school. Among many other odd jobs he held in his youth and young adulthood, Chuck was an attendant on the Astro Jets ride in the summer of 1956 when that attraction first opened at Disneyland. On New Year’s Eve, 1958, Chuck met the love of his life, Edna Ann Levenhagen, and a whirlwind romance resulted in a proposal just six weeks later with wedding vows exchanged on May 28th, 1959. After working as a Contracts Analyst with North American Rockwell and then as an Oil Lease Analyst with Shell, Chuck completed law school at Southwestern University School of Law in 1963 with the encouragement of his wife Edna. When asked why he had chosen law as a profession, Chuck would say: “I was always a great admirer of Abraham Lincoln, and if being a lawyer was good enough for Lincoln, it was good enough for me.” After a brief stint in private practice, he served as a Deputy District Attorney in Santa Barbara County, California, from 1964 - 1966, then in San Diego from 1966 - 1988, where his final assignment was Assistant Chief of the Major Violators Unit. In 1986, Chuck was named “Prosecutor of the Year” by the San Diego County Deputy District Attorney’s Association. Chuck was also the guiding light in the formation of the Deputy District Attorney’s Association in the ‘70s, and was its first president. He was appointed to the San Diego Judicial District bench in 1988 and retired as a California Superior Court Judge in 2000. Throughout his career, Chuck was widely known and admired for his honesty and integrity as a tough prosecutor and as a courteous, fair, and knowledgeable judge. Chuck and his wife Edna of over 61 years travelled the country and the world, visiting six continents, 34 countries, and all 50 U.S. capitol buildings. He was an avid bridge player and supporter of his favorite teams, the UCLA Bruins and the San Diego Padres, and played tennis in his younger years. More than anything, Chuck was dedicated to his family. He and Edna raised three children: son Tom and two daughters, Karen and Denise. He enjoyed spending time with his four grandchildren, Jessie, Kathryn, James, and Ian. Chuck was preceded in death by his parents, Robert and Jessie, and four siblings: Robert, Margery, Elizabeth, and James. He is survived by his wife Edna; children and grandchildren; and a niece, several nephews, and cousins. Private services will be held in Corvallis Saturday, February 20th. In lieu of flowers, donations may be made to the Leukemia and Lymphoma Society. Please share your thoughts and memories for the family at www.demossdurdan.com

The family of Charles Lee Patrick created this Life Tributes page to make it easy to share your memories.