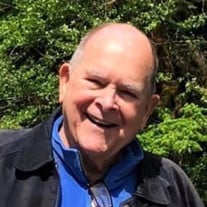 Charles Wesley Peckham of Corvallis, Oregon died September 13, 2021 after dealing with several health concerns. Charles was born in San Francisco, California on April 4, 1935; he was 86. His wife Yvonne Catherine Speer predeceased him. He is survived by his three children: Peri Kuhl, Ken Peckham, and Kirk Peckham. In addition he has 8 grandchildren. Charles grew up in Sonora, California where his family owned the Sonora Daily Newspaper. He was the youngest of four siblings (Elwyn, Donna, & Betty) and son of Orville Kenneth Peckham and Evelyn Lenoi Olson. As a boy he delivered newspapers and later worked at the Sonora Daily. Charles was senior class president after his admiration of his older brother. He was active in school athletics and sang. Chuck loved the water and was an avid water skier and became a skin diver. He began college at UC Berkeley, but transferred to Calpoly because they had a program in printing and graduated with a BS. The Sonora Daily was the first newspaper to utilize lithography. This was a problem for the state of California as they brought a suit against the newspaper and tried to shut it down. This case was taken all the way to the Supreme Court where the Sonora Daily prevailed! In December of 1955 he married Yvonne Catherine Speer and welcomed three children, Peri Anne, Kenneth Eric and Kirk Andrew, while living in Berkeley, California. Soon after they moved to Corvallis, Oregon where Charles became the Manager of the printing and mailing department located on the Oregon State Campus. Charles brought many insightful improvements to his department. Chuck was a longtime fan of Oregon State athletics throughout his 35 year career. He retired not long after the printing plant burned down. Living in Corvallis offered many opportunities for outdoor activities. The family enjoyed camping, crabbing, clamming, water skiing, backpacking and other adventures in nature. Family was extremely important so there were many trips to California to visit relatives from both sides of the family. The family traveled a month at a time during the summer to places across the United States and back such as Washington D. C. exploring the wonderful and historic places in the U.S. After retirement Chuck and Yvonne purchased a large motor home and traveled frequently. They spent much of their time with friends and relatives along the Pacific Coast. Then they purchased time share in Mexico and this became a favorite destination. It became a wonderful place where family and friends shared memories in the opulent accommodations along the coasts of Mexico. Here he was known as “Senior Carlos,” a name he loved. You would find him by the pool chatting it up with old and new friends. Charles Peckham was known to be a kind, generous and loving man. He had a delightful sense of humor and enjoyed his nightly glass of red wine. His greatest trait was his accepting attitude toward all people. He is missed by family, friends, and neighbors. Reception to be held: November 14, 2021 2:00 p.m. At the Peckham residence 2119 N.W. Robin Hood Drive Arrangements are being handled by DeMoss-Durdan Funeral Home and Crematory.

The family of Charles Wesley Peckham created this Life Tributes page to make it easy to share your memories.