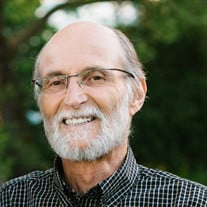 Charles Louis Thierheimer, Jr. May 27, 1952 – September 28, 2020 Charles “Chuck” Thierheimer passed away at home on Monday, September 28, after a year-long struggle with ALS. He was surrounded by family and friends. Chuck was born in Florissant, Missouri, to Charles Sr. and Joan Thierheimer, and grew up in a large family of four brothers and one sister. He received BS and MS degrees in Chemistry from the University of Missouri—St. Louis. He worked in a variety of industrial chemistry and laboratory positions in that area, contributing to new products and analytical techniques. Chuck married Cindy Dahl in St. Louis in 1982, and they moved to Corvallis, Oregon in 1987, where Chuck went to work for Hewlett-Packard in the ink chemistry group. He held a variety of positions over his 18+ years at HP and obtained many patents. Chuck spent another five years at Cascade Microtech in Beaverton, Oregon, where he greatly enjoyed the work and his colleagues. During his time in Beaverton, Chuck took up flying radio-controlled airplanes, which became a long-term hobby. He built several planes, of increasing complexity, and enjoyed taking them out on sunny mornings. He also enjoyed the wide variety of birds, squirrels and chipmunks who frequented the backyard, and always made sure they were well fed. Chuck and Cindy have a son, Erik (Rick) and a daughter, Marisa. Chuck was proud that both of the kids were interested in science – Rick obtaining a Mathematics degree and Marisa obtaining an Honors Degree in Chemical Engineering, both at OSU. It was also a blessing to have them close by. Chuck is survived by his wife of 38 years, Cindy; his son Rick; his daughter Marisa; brothers, Jeffrey and Jerry (Peggy); sister Patti Koeller (Matt); and several nieces and nephews. Chuck was especially grateful for visits with all of his siblings in the last year. He was predeceased by his parents and brother, John. The family is especially grateful to the medical and support staff at Lumina Hospice and Palliative Care in Corvallis, and to all of our local friends and neighbors who have been so supportive. DeMoss Durden is handling arrangements. Online remembrances can be posted at demossdurden.com Donations in Chuck’s memory can be made to Heartland Humane Society, Chintimini Wildlife, SafeHaven Humane Society or Lumina Hospice and Palliative Care.

The family of Charles Louis Thierheimer Jr. created this Life Tributes page to make it easy to share your memories.