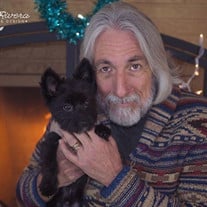 Christopher Dean Rivera passed away at his home on the afternoon of Monday December 13th, 2021. He was 70 years old and proud that he still had a magnificent head of hair. Born in Glendale California in 1951 to Sheila and Joe Rivera, he considered himself a lifelong Angeleno despite living in Corvallis, Oregon for the past 30 years. In 1969, at the age of 18, he enlisted in the United States Army to serve in the Vietnam War where he earned a medal for sharp shooting and volunteered to train with dogs to sniff out bombs and to parachute. He ended his military career as an MP in Germany where he learned a variety of colorful swear words that he would later teach his children. Christopher was a multitalented man with a myriad of hobbies throughout his life, many of which he would pass on to his children. He was an excellent baseball player, a keen photographer, an obsessive cinephile, an avid WW II history buff, and the world’s biggest USC football fan—he never missed watching a game. He participated in his eldest daughter’s photography business as her assistant and was inordinately proud of her IMDB credits, auditioned for community theater with his youngest daughters, and helped his son navigate his own high school sports career. He was always so proud that his son—known as “the boy”—inherited his love of sportsmanship and strong work ethic. His family will miss discussing the Oscars and football season with him annually. He was also the most devoted family man. He never missed one of his children’s events, regularly attending every night of their programs or games. He once went to every night of the same community theater play and sat in the front row just to show his support. When his youngest both attended the University of Southern California, he would fly down for their finals week to make sure they ate well, and to pick up extra supplies for them as they studied. He was thrilled that they chose to be Trojans and tickled when they went into careers that he found interesting—nursing and project management. He also enthusiastically attended the events of his grandchildren. Whether it was a ballet recital or a volleyball tournament, he was there—often with his trusty camera in hand to document the day. He was also incredibly proud of his wife’s accomplishments, including the acquisition of her MBA, and regularly touted her achievements. He even liked to brag about his beloved dogs: first Kobe and Molly, and lastly Pipsqueak and Kiwi his two youngest daughter’s dogs that he looked after in his retirement. In fact, he spent much of his retirement finding ways to help his children succeed where he could, whether that was helping them get their kids to daycare or packing up all their things for a cross-country move. His role as “family cruise director” and patriarch will be impossible to replace. There were few topics he knew little about, as he was a prolific reader and lifelong learner. He has left his children with an absurd number of books, an even larger number of ‘dad factoids’, mischievous senses of humor, a plethora of USC related gear, a deep love of In-n-Out, a strong dedication to family, and an admiration for those who work hard like he did. He was also well liked by their friends and their families and will live on in the large number of “Papa Rivera” stories that abound in the Corvallis and Los Angeles areas. Despite his stern demeanor, he was the parent that supported the dreams of not just his own children, but those of their friends as well. He was also the one you could always text about your troubles and get the same comforting response: “just come home.” He was the kind of man you would want in your corner and that infamous sense of comfort, and his willingness to be on your side always, will be missed dearly. He is predeceased by both of his parents Sheila and Joe and his beloved older brother Lawrence Rivera. He is survived by his wife Aviva, his half-sister Mary Alice, his four children Kammie, Keith, Hannah, and Bonnie, three grandchildren Isabella, Quentin, and Jordan and two “grand pups” Pipsqueak and Kiwi. His grumpy and crunchy exterior hid a soft center underneath. As a result, he was often the staunch defender of the rather small, the vulnerable, and the misfits. As such, in lieu of flowers, the family requests that donations be made to some of his favorite charities which include the USC Shoah Foundation, St. Jude’s Children’s Hospital, and the Defenders of Wildlife. For those who wish to celebrate his life, the family suggests heading to a sunny beach (his favorite place to be), participating as an extra in a movie (a lifelong dream he had yet to fulfill), and buying as many books at a local bookstore as you can hold (a regular expenditure of his).

Christopher Dean Rivera passed away at his home on the afternoon of Monday December 13th, 2021. He was 70 years old and proud that he still had a magnificent head of hair. Born in Glendale California in 1951 to Sheila and Joe Rivera, he considered... View Obituary & Service Information

The family of Christopher Dean Rivera created this Life Tributes page to make it easy to share your memories.

Christopher Dean Rivera passed away at his home on the afternoon...