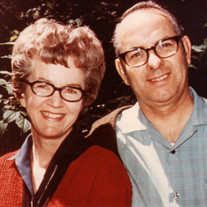 Betty Behoteguy Wallace and Charles Henderson Wallace Betty Behoteguy Wallace (née Clara Elizabeth Behoteguy) passed away on July 22, 2017 in Corvallis. She was born on October 28,1922 in Phoenix, Arizona, the 2nd child of Mildred and Henri Behoteguy (preceded by her brother, Tom). She lived in Phoenix until her junior year of college, when she transferred to Oregon State College in Corvallis, where she earned a Bachelor's degree in Secretarial Sciences. When her sorority, Pi Beta Phi, held a dance for soldiers training on their campus, she met her future husband, Charles, continued below*. Charles Henderson Wallace passed away in Corvallis on February 6, 2012 at the age of 91. He was joined by his wife of 66 years, Betty Behoteguy Wallace, of Corvallis, on July 22, 2017, age 94. They are survived by their daughter and son, Marilyn Wallace, also of Corvallis, and Don Wallace, of McKinleyville, California, as well as a few cousins, and several nieces, nephews, great-nieces and great-nephews. Charles was born on July 26, 1920 in Wichita, Kansas, the 4th son of Muriel and Charles Wallace, (preceded by brothers, Louis, Cletus and Clinton) and grew up in Kansas and Oklahoma. He went to college at the University of Oklahoma, earning a Bachelor's degree in Electrical Engineering; after graduation in 1942, he enlisted in the U.S. Army. While receiving Army training in Corvallis, OR, he met his future wife, Betty Behoteguy. *Betty and Charles corresponded while he was in Europe, and after the war ended, they were married in Oklahoma City in 1945. Life together: In December, 1947, twins Marilyn and Don were born. The family lived in Oklahoma City until moving to Wichita, Kansas in 1952. Charles worked in the oil exploration field in the Midwest until 1965, when they moved to California. He and Betty bought and ran a motel in San Luis Obispo for about 5 years before moving to the South San Francisco Bay Area, where Charles worked for Hewlett-Packard repairing medical instruments until retirement in 1982. Betty was kept busy as a home-maker, then in the early 60's, she returned to college and earned her teaching credential; later, in the late 60's/early 70's and beyond, she worked as an executive secretary for a private company, which she enjoyed. These things describe the work-history and timeline of their lives, but not the essences of them. Betty and Charlie (one of the names he went by) shared a love of music and reading, and a love of nature, including cats. They had an active social life with friends, playing bridge regularly and going on vacations with a couple other families. They went to the Methodist and sometimes Presbyterian churches, where they established long friendships and were involved in activities through the church, one of which they enjoyed in later life being an RV group, where they would take short trips around central California together. They liked to travel and in addition to trips to most of the Western states' National and State Parks, they took a cruise to Alaska and a trip with friends to Hawaii. Although both Charlie and Betty had good senses of humor, and would often make funny comments about whatever was going on or being discussed, Charlie also liked telling amusing stories, whether true or fictional. They enjoyed humorous entertainment and laughed often with their friends and family. Early friendships were kept long-term, including Betty's neighbor-friends she grew up with and Charlie's high school Washboard Band members (with whom they attended reunions in later life), as well as long-time close friends made while starting careers and families after the war. Both Betty and Chuck (his preferred name in later life) were very creative, with many hobbies and interests, and they both enjoyed do-it-yourself projects. Betty was an accomplished seamstress and a good knitter, making many sweaters, and enjoyed playing the piano for pleasure. Chuck liked photography and lapidary work, making gemstone jewelry from rough stones; but his longest creative interest was painting, first in oils, then in watercolors. His gifts from this hobby are several beautiful paintings. Chuck's and Betty's lives were wonderful examples of how to enjoy life to the fullest, and how to fill one's life with positive endeavors and appreciations. They were kind and loving spouses to each other and generous and devoted parents to Don and Marilyn. They are, of course, missed, but their legacies are ever-lasting and inspiring.

The family of Clara "Betty" Wallace created this Life Tributes page to make it easy to share your memories.