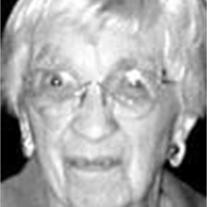 Claral Ransom McMorris of Corvallis died Thursday at Good Samaritan Regional Medical Center. She was 101. Claral was born in Fairfield, Neb., to Elijah D. and Pearl Bartram Ransom. She had vivid memories of retreating to the cave — a concrete bunker in the yard — when there were potential tornadoes. The family moved to Corvallis when she was about 16. Claral attended the old Corvallis High School on the downtown lot that is now Central Park. She graduated from CHS in 1924. During her junior year in high school, she met J. Donald McMorris. They were married March 16, 1927, in Vancouver, Wash. The couple lived in either Corvallis or Albany during most of their 53 years of marriage. Claral and Don were lifelong volunteers. During World War II, they regularly hosted at the USO. They also helped servicemen’s wives and children find housing when they came to visit their soldiers about to be shipped overseas. Those dependents were also known to be brought home for the night if housing could not be found. Field hands were scarce during the war years, so harvesting was done by women and children. Claral considered her participation in the harvesting part of the war effort. She also volunteered at the schools where her children attended. Claral remained a homemaker until 1958, when she went to work as a cook at Harding School. She continued in that capacity until the in-school cooked-meals program at Harding was closed in l971. In later years, Claral and Don often volunteered at the Corvallis Senior Center. Claral worked as a receptionist, and they also helped in the kitchen for Meals on Wheels. Claral also volunteered with the Oregon State University Thrift Shop. Her family was her great love, and she followed the activities of her children, grandchildren and great-grandchildren with much interest. She also enjoyed sewing, reading, crocheting and cooking. In addition to her parents, Claral was preceded in death by her husband of 53 years, J. Donald McMorris, sister Letha McCready and brother Charles Ransom. Survivors include her son and daughter-in-law, Donald W. and Nancy McMorris of Albany; daughter Joan M. Sandeno of Corvallis; grandchildren and their spouses, Brian and Sue McMorris of Minneapolis, Brent and Julie McMorris of Portland, Regan and Sally McMorris of Corvallis, Shawn McMorris of Portland, Robin Sandeno Ippoliti and husband Charles of Corvallis, Eric and Cindy Sandeno of Bloomington, Ind., and Brice and Sharon McMorris of Bend; and great-grandchildren Jared, Shelby, Matthew, Michael, Claire, Caitlin, Gwyneth and Wesley. A funeral service will be at 11 a.m. Friday at DeMoss-Durdan Funeral Home. Rev. Rich Fuss will officiate. Interment will be at Oaklawn Memorial Park. Memorial contributions can be made to Benton Hospice in care of DeMoss-Durdan Funeral Home, 815 N.W. Buchanan Ave., Corvallis, OR 97330.

Claral Ransom McMorris of Corvallis died Thursday at Good Samaritan Regional Medical Center. She was 101. Claral was born in Fairfield, Neb., to Elijah D. and Pearl Bartram Ransom. She had vivid memories of retreating to the cave — a concrete... View Obituary & Service Information

The family of Claral McMorris created this Life Tributes page to make it easy to share your memories.