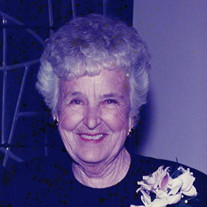 Claranell Bernice Hardenburger, a lifelong Corvallis resident passed away at the family home, April 30,2022. Claranell was born in Corvallis April10,1918, She was the second oldest of five sisters born to Ray and Mary DeMoss. The DeMoss girls had a special bond and dedication to one another that was displayed throughout their lives. It was a family pride and strength that was passed on to each of their children. Claranell attended Corvallis High School. She was an accomplished dancer and taught tap dancing during and after high school to several area youngsters including two of her sisters. Her students won many statewide competitions. After graduating from high school, she continued on to what was then Oregon State College while working at a local credit union. She met her future husband, Bob, who was working at her father’s service station. It was a love that would last for over 71 years. Bob and Nell owned and operated a turkey ranch west of town. They raised over 25,000 turkeys and at that time was the leading supplier of turkeys in the country. When an opportunity presented itself, they gave up ranching to open Les and Bob’s Sporting Goods in downtown Corvallis with her sister and husband, Les and Susan Gault. It became one of the premier businesses in Corvallis. The two couples operated the successful business until their retirement. During her life Nell was a member of the Corvallis Country Club, Beaver Club, Corvallis Lady Elks, and Tillicum. She loved working in her yard and garden, making blue ribbon sweet pickles the family loved. More importantly, Claranell was a dedicated and loving mother, always putting her own needs to the side for the sake of her family. She took great pride in her children, grandchildren, and great grandchildren. She never missed a school event, baseball game, or dance recital, traveling to Portland, San Diego and as far away as Hawaii to watch her grandchildren play or perform. She will be greatly missed by her family. She is survived by her daughter, Phyllis Peterson and her husband, Bob, five grandchildren; Kim Moreland, Derron Moreland, David Hardenburger ( Andrea), Katie Dolby( Michael), Rob Peterson; 15 great grandchildren, her sister, Gracie Zwahlen and many nieces and nephews. She was preceded in death by her husband, Bob, son, Ray Hardenburger, daughter, Mary Ann Moreland, grandson Mike Hardenburger, and her three sisters (Susan Gault, Maxine Durdan, and Rae Ardis Greenough). The family would like to thank Dr. Bryce Cleary for all his support this past year. Respecting Mom’s wishes to not have a formal service, the family will hold a private celebration of life. Condolences may be left at www.demossdurdan.com

Claranell Bernice Hardenburger, a lifelong Corvallis resident passed away at the family home, April 30,2022. Claranell was born in Corvallis April10,1918, She was the second oldest of five sisters born to Ray and Mary DeMoss. The DeMoss girls... View Obituary & Service Information

The family of Claranell B. Hardenburger created this Life Tributes page to make it easy to share your memories.