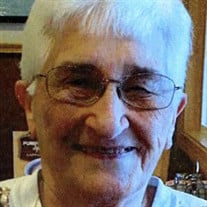 Cleo passed away June 3, 2015, surrounded by her loving family. She was 91. She was born Cleo Barbara Torgeson on the family farm in Palestine, Oregon, on Oct. 22, 1923, to Roy A. and Nina L. (Morse) Torgeson, spending her younger years in Wells, Monmouth and Lewisburg before graduating from Corvallis High School in 1941. Graduation from Eugene Business School soon followed. On March 22, 1947, she married Frank W. Gast and they settled in Blodgett. The happy times they spent in Blodgett were some of Cleo’s most cherished memories. She worked at Vosberg’s General Store and drove school bus for 14 accident-free years. She and Frank were very active in the community and were proud to have been a part of the group that was instrumental in building the Blodgett Church. In addition to Cleo’s son from a previous marriage, Michael Gene “Mick,” they added a son, Frank Leroy, and a daughter, Julie Ann, to their family. They established many life-long and enduring friendships while in Blodgett. In 1962 they relocated to Philomath where the next 15 years Cleo worked at First Interstate Bank until she retired. Soon after retirement, and Frank’s very untimely death in 1978, she relocated to Central Oregon. In the fullness of time she met and married Lawrence “Larry” Simons and spent many enjoyable years RVing around the United States, eventually spending winters in Tampa Bay, Florida, and summers in Prineville, Oregon. With Larry’s failing health, they settled in Redmond, Oregon, where they lived until Larry passed away in 2005, at which time Cleo returned Corvallis where she lived until her passing. In her person, Cleo was a lovely, outgoing and tender-hearted woman who loved to hear and tell a good story. She had a marvelous sense of humor and wasn’t afraid to laugh at herself, and others, when they deserved it. She was forthright, determined and didn’t mince words when the occasion called for it. Her cooking and, especially her baking skills, were treasured by her family, notably her apple pies and chicken and noodles with her delicious “homemade” noodles, and she was always willing to share her accomplished kitchen skills with anyone who demonstrated a serious interest. No one ever left Cleo’s home hungry, especially the hummingbirds. She was respected and adored by all who knew her. She is survived by her brother, Morse Torgeson of Corvallis; daughter Julie Ramirez of Redmond; sons Frank Gast of Lewisburg and Michael “Mick” Gast of John Day; numerous nieces and nephews; and many grandchildren, great-grandchildren and great-great-grandchildren. A celebration of life is set from noon to 4 p.m. Saturday, June 20, at Meadow Park Mobile Estates Clubhouse, 227 N.E. Conifer Drive, Corvallis. Bring a dish, if you’d like, and memories to share.

Cleo passed away June 3, 2015, surrounded by her loving family. She was 91. She was born Cleo Barbara Torgeson on the family farm in Palestine, Oregon, on Oct. 22, 1923, to Roy A. and Nina L. (Morse) Torgeson, spending her younger years in... View Obituary & Service Information

The family of Cleo Torgeson Gast Simons created this Life Tributes page to make it easy to share your memories.