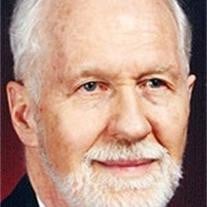 Clinton D. Morrison Jr., 85, of Corvallis passed away Tuesday, March 2, 2010, at Corvallis Manor. Born in Oklahoma City, Okla., to Clinton Morrison Sr. and Margaret Emily Connor Morrison, he attended Classen High School and Park College (Parkville, Mo.), where he was student body president, active in debate and singing, and listed in Who’s Who among Students in American Colleges 1944. It was at Park that he met Jean Langley. Clint and Jean were married June 3, 1947. Clint graduated from McCormick Theological Seminary in Chicago, Ill., in 1948, and was ordained to the ministry in the Presbyterian Church that year. He served a year as a pastor in Altamont, Ill., before going to Basel, Switzerland, from 1949 to 1951 to study for a doctor of theology degree. Upon returning, he joined the faculty of McCormick Seminary, and taught Greek and New Testament exegesis there until 1968. In 1968, he moved to Louisville Presbyterian Theological Seminary as dean and professor of New Testament until his retirement in 1990. Clint and Jean moved to Corvallis in 1998. Clint was a gracious and modest man who combined a scholarly mind, a deep faith and concern for justice with an active sense of humor, and a love of a good story. His scholarly achievements include an Analytical Concordance to the Revised Standard Version of the New Testament, compiled manually over many years and published in 1979. He was a member of many professional committees on accreditation of theological schools and examination of candidates. He was also a proficient calligrapher, and a skilled volunteer reader for Reading for the Blind and Dyslexic. His other volunteer activities included more than 100 blood donations to the Red Cross and hundreds of letters written for Amnesty International, as well as English conversation with foreign students for Crossroads International. Clint is survived by his wife, Jean; three children, Clint Morrison III of Corvallis, Greg Morrison of Denver, Colo., and Amy Morrison of Arcadia, Calif.; and grandchildren Elise, Theodore and Laura Morrison. A memorial service will take place at 2 p.m. Monday, March 8, at First Presbyterian Church of Corvallis. Memorial donations can be sent to the volunteer organizations listed above, or to Louisville Presbyterian Seminary.

The family of Clinton Morrison created this Life Tributes page to make it easy to share your memories.