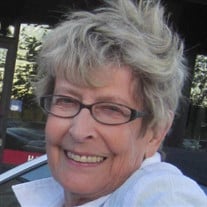 CONSTANCE (CONNIE) MARDEE (MILLER) PALMER Connie, age 78, died peacefully at her daughter’s home on Friday, January 1, 2016. She was born June 9, 1937 on a rainy day in Wichita, KS to Beulah and O.G. Miller. She graduated from Pratt High School, Pratt, Kansas 1955. During her high school years she worked in her father’s restaurant, taught twirling, was a majorette and French horn player in the high school band and managed to put in 9 years of piano lessons. She earned her BS in Business degree from Emporia Teachers State College in 1959. She taught one year in Osage City Kansas High School before moving to Redondo Beach, CA with her husband, Kermit Palmer. She taught in the Business Department at Redondo Union H.S. for 4 years. She received her M.S. in Education from University of Southern California in 1964. Daughter Monette was born in 1964. The family moved to Ashland, OR in 1965 where son, Jeffrey, was born in 1967. Connie and children moved to Corvallis, OR after her divorce. She taught in the Business Education Department at Oregon State University for 18 years. She especially enjoyed teaching and supervising her student teachers. Many of her student teachers ended up teaching and retiring from the surrounding area. When the Business Education Department was phased out at OSU, she taught in the computer office lab at Linn Benton Community College and also substituted in the local high schools, often for her former students. Teaching was her life career and she loved it! She met Less Duckett, the love of her life and he loved to tell people that he courted her for 23 years before she finally accepted his proposal. They were married July 21, 1991 at “high noon” on the Ponderosa Ranch at Lake Tahoe. Summers were spent camping, fishing, traveling, going to the coast, and working among the hundreds of flowers and roses in their yard. They also spent lots of time obtaining and organizing Connie’s rather unusual hobby of collecting swizzle sticks of which she had over 38,000 different ones from around the world. They would attend the International Swizzle Stick Convention in Las Vegas every two years and this year she designed the swizzle stick that was made for distribution to members at the convention she attended in September. She also loved playing the keyboard Les gave her. Poetry writing and photography were hobbies she started back n grade school and continued all of her life. Connie and Les were married for 10 years before Les passed away. The last several years she developed a passion for cruising -- she cruised the Eastern & Western Mediterrian, Eastern, Western & Southern Caribbean (several times), the Mexican Riviera, Pacific Coast & Hawaii. She would probably catch a cruise to Heaven if one were going that far! Connie’s children and grandchildren were the joys and blessings of her life. She especially enjoyed the many times her grandchildren would just “stop” by to visit on their way home from school and just sit and share about their day. Watching each one grow and develop into their own unique personality was such a delight. She is survived by her sister Dee Horn(John), her children Monette Palmer LeMay (Malcolm), Jeff Palmer (Janet); step-children Amy Wong {Roger Kalua), and Mark Duckett (Gail); grandchildren Chris and Lindsey LeMay, Madeline Palmer, Kurt and Sean Okaneku and Catherine and Michael Duckett. She was preceded in death by her parents O.G. and Beulah Miller, brother Calvin Miller, and husband Les Duckett. A celebration of Connie’s life will be held in the early spring as the flowers in our gardens start to awaken once again. In lieu of flowers to honor Connie, contributions may be made in her name to the Benton County Hospice at www.bentonhospice.org

CONSTANCE (CONNIE) MARDEE (MILLER) PALMER Connie, age 78, died peacefully at her daughter&#8217;s home on Friday, January 1, 2016. She was born June 9, 1937 on a rainy day in Wichita, KS to Beulah and O.G. Miller. She graduated from Pratt... View Obituary & Service Information

The family of Constance "Connie" Palmer created this Life Tributes page to make it easy to share your memories.