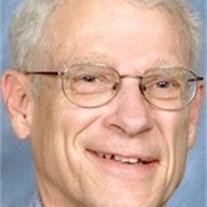 March 4, 1943 -- March 18, 2010 Curt Cook, age 67, died at his home in Corvallis after a four-year battle with cancer. He was born on March 4, 1943 in Moline, Ill. -- the middle son of Albert and Elsie Cook. During his senior year in high school, he met Joan Stutz in a math class. She invited him to a Sadie Hawkins dance, and five years later they were married on Aug. 14, 1965, in Moline. After his 1961 graduation from Moline High School, he graduated in 1965 from Augustana College in Rock Island, Ill., where he majored in mathematics and was a member of Phi Beta Kappa. Next he received a master’s degree and then a doctorate in computer science at the University of Iowa in Iowa City. He came with his family to Oregon State University, sight unseen, in August 1970 as part of the math department. In 1972, he had the distinction of being the first person to move full time into the newly formed computer science department. During his 33-year tenure at OSU, he co-authored two books and had numerous journal publications and conference presentations. He spent one year on sabbatical at Colorado State University in Fort Collins, and four and a half months on sabbatical in Copenhagen, Denmark. In 1998, he was given the College of Engineering Alumni Professor Award in recognition of his positive influence on students and the university. He retired from OSU in 2003, and became an Emeritus faculty member. Curt enjoyed sports his whole life. When he was 12, he pitched a perfect game in baseball for the city championship; he continued with baseball through college. At Augustana, he had a perfect record (7-0) his senior year, in which he and a teammate were the first athletes from Augustana to be named to the First-Team All American baseball team. In 1982, he was inducted into Augustana’s Tribe of Vikings Hall of Fame. In high school, he was the quarterback on the football team, and received the M Men Football Memorial Award for sportsmanship and leadership. After college, he played men’s softball, and in 1994, he started the coed softball team at the First United Methodist Church. He played in many racquetball and tennis tournaments, and continued playing some tennis until last fall. He also enjoyed golfing, playing basketball, and riding his bike, which he rode to work at the university most every day. Although Curt loved playing sports, his favorite activity was playing with and watching his grandchildren. Assembling and firing off rockets with his grandsons was a recent favorite. Curt and Joan enjoyed traveling, and visited Chile, Mexico, Canada, Australia, New Zealand and several countries in Europe. They also traveled quite a bit in the United States. Curt was an active member of the First United Methodist Church, and enjoyed reading, gardening and spending time with relatives and friends. He was an example to all who knew him: his calm and even temperament, his patience and genuine consideration for others, his professional accomplishments, his fitness and dedication. Curt is survived by his wife, Joan; daughter Elizabeth Bogner, her husband, Jason, and their two sons, Aaron and Sam, all of Schaumburg, Ill.; daughter Angela Baker, her husband, Jefry, and their two daughters, Madeline and Vega, all of Lake Oswego; brother Dennis Cook and his wife, Sandy, of Moline; and brother Gary Cook of East Moline, Ill. A memorial service is scheduled for 10 a.m. on Saturday, March 27, at the First United Methodist Church, Corvallis. Memorial contributions may be made to the Curtis Cook Scholarship for Computer Science through the OSU Foundation; the First United Methodist Church; Benton Hospice Service; or the American Cancer Society, in care of DeMoss-Durdan Funeral Home, 815 N.W. Buchanan Ave., Corvallis, OR 97330.

The family of Curtis Cook created this Life Tributes page to make it easy to share your memories.