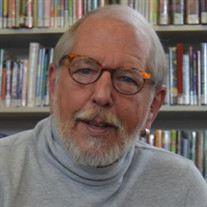 Curtis Lee Kiefer, retired Youth Services Manager at the Corvallis-Benton County Public Library, died Saturday, December 1, at Samaritan Evergreen Hospice House in Albany. He had the courage to choose to face imminent death over treatment which would have been outside Corvallis. Born January 9, 1952, on the MacDill Air Force Base in Tampa, Florida, he was the son of Walter and Helen (Klund) Kiefer. Shortly before his death, he talked with friends about his “charmed life,” recounting that at all stages in his life he felt loved, and spoke of the happiness and peace that this brought to his life. On November 11, 2011, he married Walter A. Frankel, his partner of thirty years. The ceremony took place in West Sand Lake, New York, with family and friends. His earliest schooling was at Marymount School, in Rome, Italy, where he was speaking three languages. He graduated from Sanford School in Hockessin, Delaware and received his baccalaureate from Washington College in Chestertown, Maryland. He received his master's degree from Drexel University School of Library and Information Science in Philadelphia. Though he lived in several places, he considered Wilmington, Delaware his home until he moved to Corvallis, which became his cherished home. Before pursuing his library degree, he was On Her Majesty's Service as a high school music teacher in Nassau, Bahamas. These two years developed into a lifelong interest in the British royal family. His first employment as a librarian was at the Free Library of Philadelphia, where he worked in the Central Music Department, as well as two of the regional libraries. He managed the George Institute Library, and ended as Head of the Central Children's Department. In 1993, he accepted the position of Youth Services Manager at the Corvallis-Benton County Public Library, from which he retired in 2014. He restructured youth programming with a foundation in developmental psychology and educational theory. He introduced infant story times, and particularly enjoyed working with pre-school children. Throughout the community, he was recognized by parents and children of all ages as the library storyteller, and was known for leading “Shake Out Your Sillies.” He worked to make the Library “safe space” for teenagers. He advocated for parenting programs and teaching skills to help families raise their children. He also recognized that libraries could support more than books and literacy, fostering musical and other cultural programs. He believed strongly that the library should partner with community organizations and institutions. He worked with the Oregon Library Association in protecting Intellectual Freedom. He became advocate for diversity training, working for the city of Corvallis with its partners to achieve such goals. He was a leader in starting the STARS after school program for youth. He enjoyed working with Old Mill Center for Children and Families, assisting in developing the Relief Nursery, and serving as president of the Friends of Old Mill. He served on the boards of Corvallis Fall Festival, Corvallis Arts Center, Tcha Te Man Wi Storytelling Festival, Corvallis-OSU Piano International (COPI), Benton County Historical Society, and the Library Foundation. Curtis loved people. He became a seasoned conversationalist, often opinionated, colored with humor or peppered with quick repartee. He was never closed-minded, for he was inquisitive, both willing and anxious to learn new things. In retirement, he did the New York Times crossword puzzle daily and began taking piano lessons. He had a lifelong love of all music, particularly opera, and especially those of Richard Wagner. Ballet was one of his passions, from taking his first ballet classes in his twenties to traveling to Milan, Italy; to see his favorite dancer. Travel was an integral part of his life. He enjoyed visiting museums, historical sites, and shopping. He had an eye for style, particularly in his clothing. This extended to design, architecture, decorating, and collecting art, as well as china, crystal, silver and linen. For twenty years, he could be seen driving his Miata about Corvallis, enjoying the many months he could have the top down. His joie de vivre extended to entertaining and cooking, and he had a special attachment to his dogs. He was at ease with and open about being gay, attending two marches on Washington for gay rights. He was invited to speak to community groups about his sexual orientation. With his husband, he was an active plaintiff in the Oregon court cases for marriage equality. He is survived by his loved husband of thirty-seven years, Walter Frankel, as well as by his loving sister-in-law, Christine Fedory; and his nieces, Anne Ragoni (Tom) and Eileen Fedory, all of Averill Park, New York. A remembrance and celebration of his life will be held in the early part of the New Year. Contributions in his memory can be made to the Corvallis-Benton County Public Library Foundation.

The family of Curtis Lee Kiefer created this Life Tributes page to make it easy to share your memories.