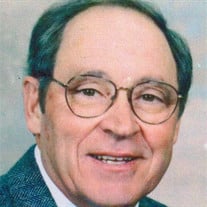 Cyrus Weck Austin, 85, died Monday, February 19, 2018. Cyrus was born in East Helena, Montana to Cyrus Weck Sr., and Mildred Marie (Mancini)Austin. He went to grade school in Conrad and junior high and high school in Helena. He attended undergraduate school at the University of Montana before going to Marquette Dental in Milwaukee, Wisconsin, graduating in 1959. He was in the ROTC in San Pedro, California and later served for four years as a dentist in the US Army. On August 20, 1955, he married Jacqueline Gould in Kalispell, Montana. He and Jacqueline and their growing family moved to Corvallis to start his dental practice in 1963. Cyrus practiced dentistry in Corvallis for 32 years. Before retirement, his youngest daughter, Sara Ann Austin, joined him in his practice. He loved the art and science of dentistry and he definitely enjoyed his patients because he was a people person. We will always remember Cyrus as a wonderful, loving husband and a fantastic father, He loved to laugh and had a super sense of humor. He had a strong determination, good character and had many interests. He was fluent in German and climbed Mt. Hood and many other mountains with his close friend, Ed Meihoff. He took long distance bike rides, skied and was an avid reader. He had a very generous spirit and heart. He went to coffee weekly with a group of faithful men, who proved to be his faithful friends. He is survived by son, Brian Austin; daughters, Jamie Brown and Sara Austin; seven grandchildren; four great-grandchildren; and sisters, Marie Austin Overturf, and Emme Austin Brown. He was preceded in death by his parents, Cyrus and Mildred Austin, and wife,Jacqueline Austin. A private memorial service will be held later in Montana. In lieu f flowers, donations may be made to Lumina Hospice. Please share your thoughts and memories for the family at www.demossdurdan.com

The family of Dr. Cyrus Weck Austin created this Life Tributes page to make it easy to share your memories.