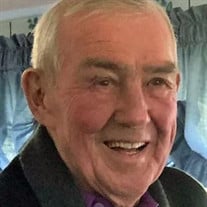 1935 — June 1, 2018 Danny Eugene Hart was a true gentleman that lived life to the fullest until his last day, June 1, 2018. He was at peace surrounded by the love of his family and many close friends. Danny was born in Corvallis in 1935 and lived his entire life in Philomath. He attended Philomath High School, where he met and fell in love with Darlene Cooper. Last Christmas, the day before their 60th anniversary, Danny announced that he loved her more every day. Darlene described Danny as a caring, kind and hardworking man that never had a bad thing to say about anyone. Danny and Darlene have three children, Leon Hart (Taryn), Leslie Hart and Lance Hart (Kristi); six grandchildren, Danielle, Cory, Kendall, Joseph, Joshua and Brianna; and two great-grandchildren, Raine and Ophelia. He is also survived by his siblings, Diane (Doug)Geiger, Debi (Mike) Twenge, David (Barb) Hart, nieces, nephews and many relatives. Danny is preceded in death by his parents, Dan and Lavora Hart Danny was a true family man that represented strength and stability for his children and grandchildren. Danny started working for Pepsi in 1966 as a delivery man and retired after 31 years. He took pride in participating in the annual Christmas lighting display at the Pepsi plant. His work with Pepsi gave him the opportunity for interaction with the public. Danny was a very social man and had friends around the world. His children remember times when he would run into friends while traveling in Las Vegas, Disneyland, Hawaii, New York and Europe. Danny loved the outdoors. He was a fisherman and hunter and loved to paint nature. He often took his children and grandchildren camping and taught them to love animals and nature as he did. Danny was instrumental in teaching his grandchildren to drive by letting them practice with the tractor, and no one ever got a speeding ticket on Hart acres. Danny loved to golf and was out on the course four weeks before he died, with enough energy to complain about his score. He was a lifelong Beavers supporter and shared his love of sports with his children and grandchildren. A memorial service for Danny will be held at 11 a.m. on Wednesday, June 20, at the College United Methodist Church, 1123 Main Street, Philomath. In lieu of flowers or gifts, the Hart family would like you to remember to hold your loved ones close.

The family of Danny E. Hart created this Life Tributes page to make it easy to share your memories.